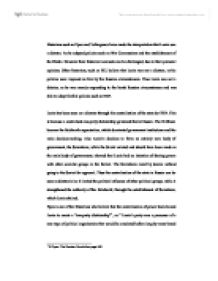 Historians such as Pipes and Volkogonov have made the interpretation that Lenin was a dictator.

Historians such as Pipes and Volkogonov have made the interpretation that Lenin was a dictator. As he adopted policies such as War Communism and the establishment of the Cheka. However their historical accounts can be challenged, due to their personal opinions. Other historians, such as Hill, believe that Lenin was not a dictator, as his policies were imposed on him by the Russian circumstances. Thus Lenin was not a dictator, as he was merely responding to the harsh Russian circumstances and was able to adopt flexible policies such as NEP. Lenin has been seen as a dictator through his centralisation of the state by 1924. This is because a centralised one-party dictatorship governed Soviet Russia. The Politburo became the Bolshevik organisation, which dominated government institutions and the main decision-making. Also Lenin's decision to form an entirely new body of government, the Sovnakom, while the Soviet existed and should have been made as the main body of government, showed that Lenin had no intention of sharing power with other socialist groups in the Soviet. The Sovnakom ruled by decree without going to the Soviet for approval. Thus the centralisation of the state in Russia can be seen as dictatorial as it limited the political influence of other political groups, while it strengthened the authority of the Bolshevik, through the establishment of Sovnakom, which Lenin chaired. Pipes is one of the Historians who believe that the centralisation of power had allowed Lenin to create a "one-party dictatorship"1, as " Lenin's party was a precursor of a new type of political organisation that would be emulated before long by mass-based dictators"2. Thus this historian is suggesting that Lenin creation of the Sovnakom, allowed his party to rule Russia through dictatorial means. This opinion is to an extent true, as the creation of the Sovnakom showed that the main decision making was taken by the Bolshevik centre with little account taken of other political viewpoints. ...read more.

Other historians also believe that Lenin was in a threat from the first moment he come into power, thus he needed to use terror in order to protect his authority. This view is supported by Liebman, who believes that "Lenin's motive- to defend the soviet power against the attacks of counter revolutionaries"13, led him to use terror as he was facing opposition from 1917. This is proven by the fact that the opposition to Lenin came both from within Russia and from outside Russia. On 10 November 1917 the Morning Post in London called for direct military action against the Bolsheviks, also as the Bolsheviks seized power in October 1917 Kerensky and General Krasnov attempted to rally an army onto Petrograd in November 1917. This therefore shows that Lenin faced opposition and a terror threat from the first moment he came to power, thus he merely responded to this terror. Overall, Lenin used the Red Terror as a response to the terror that already existed in Russia when he had come to power. Lenin established the Red Terror after he had faced threats from both within Russia and from foreign intervention, thus Lenin cannot be seen as a dictator. This is because Lenin did not establish terror for personal interest and to control all political opposition, he established the terror in order to deal with terrorist opposition in the same way any regime would. The use of the CHEKA is also viewed by Service as a temporary measure, he believes that "Lenin believed that the need for such an organisation would be only temporary...Lenin did not at this stage call for a campaign of extensive mass terror"14. This view is right, as Lenin saw the CHEKA as a temporary measure to protect the Bolshevik regime during its infancy to ensure its survival. Furthermore, the CHEKA was temporary, as during the Civil War the role of the CHEKA had declined. ...read more.