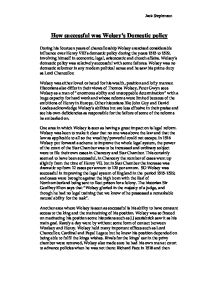 Jack Stephenson How successful was Wolsey's Domestic policy During his fourteen years of chancellorship Wolsey exercised considerable influence over Henry VIII's domestic policy during the years 1515 to 1529, involving himself in economic, legal, aristocratic and church affairs. Wolsey's domestic policy was relatively successful with some failures. Wolsey was no domestic reformer in any modern political sense and he saw his prime duty as Lord Chancellor. Wolsey was either loved or hated for his wealth, position and lofty manner. Historians also differ in their views of Thomos Wolsey, Peter Gwyn sees Wolsey as a man of "enormous ability and unstoppable determination" with a huge capacity for hard work and whose reforms were limited because of the ambitions of Henry in Europe. Other historians like John Guy and David Loades acknowledge Wolsey's abilities but are less effusive in their praise and see his own deficiencies as responsible for the failure of some of the reforms he embarked on. One area in which Wolsey is seen as having a great impact on is legal reform. ...read more.

Another area where Wolsey is seen as successful is his ability to have constant access to the king and the maintaining of his position. Wolsey was so fixated on marinating his position some historians such as J.J scarisbrick saw it as his main goal. Rarely a day went by without some form of contact between Woolsey and Henry. Wolsey held many important offices such as Lord Chancellor, Cardinal and Papal Legate but he knew his position depended on being able to fulfil the kings wishes. Rivals for the kings' ear in the privy chamber were removed, Wolsey also made sure he had his own man at court to advance policies when he was not there: Richard Pace in 1518 and then later William Norris. Even though Wolsey was successful in this area he sacrificed many other reforms to maintain his position. Wolsey was not good at managing parliament. Parliament was first called in 1515 and complaints against the church dominated, provoked by the Richard Hunne case, parliament was not called again until 1523. ...read more.

There was no development on the concern over benefit of clergy and pluralism. Benefit of clergy had been suspended in 1512 and a law extending the suspension was due to be renewed in 1215 but it never happened as Wolsey simply ignored the issue. Wolsey had a big impact on finance. This was because Henry was preparing for war with France. In 1515 there was a subsidy which was collected four times in 1513-14 and in 1523, this raised �320,000. Then in 1525 Wolsey used the Amicable Grant to gain money, this forced loan provoked a rebellion of 10,000 men in Lavenham. Wolsey had been successful thus far as he had got the money he needed, however the rebels were pardoned by Wolsey and he publicly apologised to them. Which is seen as one of his biggest failures as not only was it very humiliating for Wolsey it also showed a divide between the King and Wolsey. Wolsey therefore had some successes in his domestic policy. The improvements to the law and the subsidy were certainly successful but his failure was his goal of marinating his position as he didn't finish many other reforms and he avoided church reform. ...read more.

The student has tackled a hard question very well and has answered with fluency via a well structured and argued essay. The judgement of "success" is a hard concept to grasp and there is always the danger of either missing ...

The student has tackled a hard question very well and has answered with fluency via a well structured and argued essay. The judgement of "success" is a hard concept to grasp and there is always the danger of either missing the point of the question or giving long and 'waffley' answers. The use of historians is very good and helps support the argument well. A strong opening and conclusion is given which is key to identifying a well written essay.

The level of analysis is excellent. The historiography present in the essay helps push marks up; however, I would say that there are a few cases where a quote appears to be put into the essay just for the sake of it being there. Such quotes do nothing to the essay and coursework word counts could be better used for e.g. developing a point further in another area. The general rule is that if a quote or an historian's view is not supported, then it is pretty useless in the essay. That said, the evidence provided in the essay gives sound foundations to developing a very strong argument.

I found one spelling mistake - the rest, grammar and punctuation, are perfect. The student makes great use of historians to back up their argument and presents the argument in a very well structured essay. The common danger is the structure of essay - a weak structure naturally gives way to a weak argument (as the argument is buried in a confused format). Thus, the student has handled this problem very well.