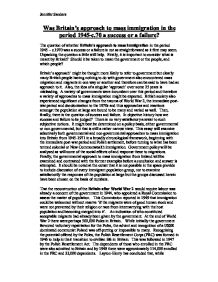 Was Britain(TM)s approach to mass immigration in the period 1945-c.70 a success or a failure?

Was Britain's approach to mass immigration in the period 1945-c.70 a success or a failure? The question of whether Britain's approach to mass immigration in the period 1945 - c.1970 was a success or a failure is not as straightforward as it first may seem. Unpacking the question a little will help. Firstly, it is important to consider what is meant by Britain? Should it be taken to mean the government or the people, and which people? Britain's approach' might be thought more likely to refer to government but clearly many British people having nothing to do with government also encountered mass migration and migrants in one way or another and therefore can be said to have had an approach to it. Also, the idea of a singular 'approach' over some 25 years is misleading. A variety of governments were incumbent over this period and therefore a variety of approaches to mass immigration might be expected. British society also experienced significant changes from the trauma of World War 2, the immediate post-war period and decolonisation to the 1970s and thus approaches and reactions amongst the population at large are bound to be many and varied as well. Then, finally, there is the question of success and failure. In objective history how are success and failure to be judged? There is no very satisfactory answer to such subjective notions. It might best be determined on a policy basis, either governmental or non-governmental, but that is still a rather narrow view. ...read more.

The immigration of coloured people was now being seen as a problem in several areas of British life although because of the small numbers involved, the Labour government chose not to act and curtail the traditional rights of citizens. The new Conservative government of 1951 were also concerned with avoiding the creation of, in Churchill's words, 'a magpie society'. Both Labour and Conservative governments from 1948-62 were involved in the 'complex political and ideological racialisation of immigration policy' and had by 1952 'instituted some covert, and sometimes illegal, administrative measures to discourage black immigration'. Debate continued throughout the 1950s about non-white immigration and social problems that were, in the minds of some, intimately connected with it. Where blacks had settled in Britain before the war, racial prejudice was already a factor but during the war, when co-operation and unity were vital, it may have lessened for a time. For non-white immigrants the post-war era revealed continuing hostility and vilification from various parts of society, including in Stepney a priest who considered that blacks posed a social and moral problem. Incidents of violence occurred in the late 1940s between whites, sometimes Irish immigrants, and non-whites in Birmingham, Liverpool and London. These continued sporadically, leading to the much publicised Notting Hill and Nottingham riots in 1958 and the again in 1968. There were problems on both sides including discrimination against non-whites in employment and housing while some whites also worried about these issues and it seems that certain employers and landlords, seeking to maximise their profits took advantage of the situation. ...read more.

Indeed it seems that in the late 1960s even Labour accommodated itself to a 'White Britain Policy' and the difference in approach to Irish and West Indian and Indian immigrants clearly bears this out. Even today it is apparently acceptable to make a special case for the Irish who, according to Migration Watch UK 'hardly come into the same category since they were part of Great Britain for centuries' despite the fact that this ignores Irish ethnicity and identity while favouring skin colour, language and historical political and economic domination as reasons for some spurious sameness. An Irish anecdote illustrates the offensiveness of this, stating 'just because we speak English doesn't mean we are the same'. Racial and immigration issues became inextricably linked and highly politicised and the prominence of Enoch Powell lead to the rise and normalisation of far right groups such as the National Front and the BNP, still active today and recently on trial for race crimes. Nowadays the debate centres around asylum seekers and illegal immigrants, who, in the style of Powell's immigrants, threaten, despite the facts, to 'swamp' Britain, and even in the run-up to the current election the Conservative leader Michael Howard is making immigration a central election issue. Was the approach a success? In terms of keeping non-white colonial and New Commonwealth citizens out of Britain, no. In terms of linking and politicising immigration and r****m and normalising prejudice in British society, yes. ...read more.