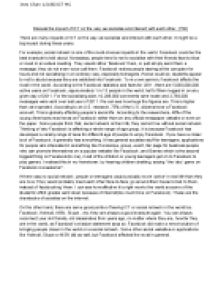 research, 75% of the U.S. citizens have a Facebook account. This is globally affecting people?s social life. According to the researchers, 48% of the young Americans read news on Facebook rather than on any official newspaper website or even on the paper. Some people think that, social network is their life; they cannot live without social network. Thinking of why Facebook is affecting a whole range of age group, it is because Facebook has developed a variety range of area for different age of people to enjoy Facebook. If you have a closer look of Facebook, it generally has everything. It has general socialise stuff for teenagers, applications for people who interested in something like Horoscope, group, event, fan page for business people who can promote themselves on a popular website like Facebook, ...read more.

I can see how affective it is right now to the world as some of the students? effort grades went down because of internet(too much time on Facebook). These are the drawbacks of socialise on the internet. On the other hand, there are some good points of having ICT or social network in the world too. Facebook, Hotmail, MSN, Skype?etc. they are always a good example again. You can always reconnect your old friends, old classmates from years ago, no matter where they are, how far they are in the world, as Facebook?s mission statement says so. Facebook did make a new evolution of bringing people closer in the world on a social network. Some other social websites or applications like Hotmail, Skype or MSN did as well, but Facebook affected the most in general. ...read more.