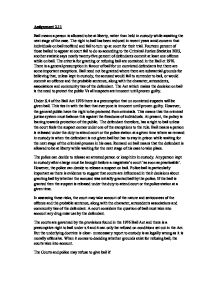 Bail. Under S.4 of the Bail Act 1976 there is a presumption that un convicted suspects will be given bail. This ties in with the fact that everyone is innocent until proven guilty

Assignment 2.11 Bail means a person is allowed to be at liberty, rather than held in custody while awaiting the next stage of the case. The right to bail has been reduced in recent years amid concern that individuals on bail reoffend and fail to turn up at court for their trial. Fourteen percent of those bailed to appear at court fail to do so according to the Criminal Justice Statistics 2003, another statistic says nearly twenty-five percent of defendants commit at least one offence while on bail. The criteria for granting or refusing bail are contained in the Bail ct 1976. There is a general presumption in favour of bail for un convicted defendants but there are some important exceptions. Bail need not be granted where there are substantial grounds for believing that, unless kept in custody, the accused would fail to surrender to bail, or would commit an offence and the probable sentence, along with the character, antecedents, associations and community ties of the defendant. ...read more.

If the bail is granted then the suspect is released under the duty to attend court or the police station at a given time. In assessing these risks, the court may take account of the nature and seriousness of the offence and the probable sentence, along with the character, antecedents associations and community ties of the defendant. A court considers the question of bail must take into account any drug miss use by the defendant. The courts are governed by the provisions found in the 1976 Bail Act and there is a presumptive right to bail under s.4 and it can only be refused on conditions set out in the Act. But the underlying doctrine is clear- unnecessary report to custody is as legally wrong as it is morally offensive. When it comes to deciding whether grounds exist for refusing bail, the courts take into account. The Courts and police may refuse to give bail if * Bail need not be granted where are substantial grounds for believing that, unless kept in custody ...read more.

The accused will usually be allowed only one further bail application the court does not have to hear further applications unless there has been a change in circumstances. When the remand in custody is on the basis of insufficient information, this is not technically a refusal of bail, so the accused may still make two applications. Bail can be granted subject to conditions, such as that the accused obtain legal advice before their next court appearance. When the defendant is on remand they lose precious time they could be spending with their family before the case. Some people on average are on remand from between six to twelve months. One advantage of criminals being remand for the public are the public feel more safe when the criminal is in prison, for the government when criminals are in remand, the community people live in looks safe. Lastly when criminals are in remand the police also have one less criminal too worry out. 60% of those refused remand are finally acquitted or given non custodial bail. ...read more.

Summary: a basically accurate outline of when bail should be granted in criminal cases. There is some repetition and some comments need further development.
Rating: ***