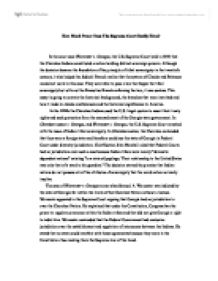 How much power does the Supreme court really have?

How Much Power Does The Supreme Court Really Have? In the court case Worcester v. Georgia, the U.S. Supreme Court held in 1832 that the Cherokee Indians constituted a nation holding distinct sovereign powers. Although the decision became the foundation of the principle of tribal sovereignty in the twentieth century, it also helped the Judicial Branch realize that the system of Checks and Balances would not work in this case. They were able to pass a law that began the tribal sovereignty but with out the Executive Branch enforcing the law, it was useless. This essay is going to contain the historical background, the branches that were involved and how it leads to checks and balances and the historical significance to America. ...read more.

Their relationship to the United States was only that of a ward to his guardian." The decision started the premise that Indian nations do not possess all of the attributes of sovereignty that the word nation normally implies. The case of Worcester v. Georgia arose when Samuel A. Worcester was indicted by the state of Georgia for within the limits of the Cherokee Nation without a license. Worcester appealed to the Supreme Court arguing that Georgia had no jurisdiction to over the Cherokee Nation. He explained that under the Constitution, Congress has the power to regulate commerce within the Indian tribes and that did not give Georgia a right to indict him. Worcester contended that the Federal Government had exclusive jurisdiction over the establishment and regulation of intercourse between the Indians. ...read more.

Now let him enforce it." Jackson made no effort to enforce the law passed by the Supreme Court instead used his power to make sure that the Cherokee leaders signed the removal treaty in order to remove the Cherokee nation from Georgia. In this case, the system of Checks and Balances did not work because, the Executive Branch checked the power of the Judicial branch by not enforcing a law that was passed therefore making that law useless. This case lead to a huge political impact because it was the first time that the Executive branch refused to do its job of reinforcing the law passed by the Supreme Court. Therefore making the law useless since there was a law but nobody to enforce it. Also this case stated the limited power states had on a sovereign nation establishing the foundation of the principle of tribal sovereignty in the twentieth century. ...read more.