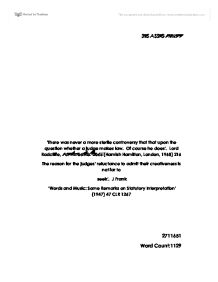 There was never a more sterile controversy that that upon the question whether a judge makes law. Of course he does(TM). Lord Radcliffe, Not in Feather Beds (Hamish Hamilton, London, 1968) 216

‘There was never a more sterile controversy that that upon the question whether a judge makes law.  Of course he does’.  Lord Radcliffe, Not in Feather Beds (Hamish Hamilton, London, 1968) 216

Judges are in charge of trials. They make sure that trials are fair. The judge hears all the witnesses and any other evidence presented by the parties of the case and then issues a ruling on the matter. To make their decisions, judges research legal issues. Judges also write about their decisions and legal opinions. Sometimes, they ask lawyers or legal assistants to help them with research. If a person is convicted of a crime, a judge decides whether or not the person will go to prison and for how long. Nowadays, there is an important jurisprudential debate between adherents of this declaratory theory and those who arguing or accepting that judges do make law.

According to Declaratory theory judges role is merely declaring the existing law. Moreover, Blackstone in eighteenth century argued that ‘the decisions of courts of justice are the evidence of what is common law’(Zander,2004). Moreover, Sir Matthew Hale stated that the decision of courts can not make law so called for that only parliament and king can do(socserv.mcmaster.ca).  In Willis v Baddeley [1892] 2 QB 324, Lord Esher stated:

"There is  no such thing as judge-made law, for the judges do not make the law, though they frequently have to apply existing law to circumstances as to which it has not previously been authoritatively laid down that such law is applicable."

However, the modern view is that judges make law. Lord Radcliffe said (Not in Feather Beds, p215, 1968):

"there was never a more sterile controversy than that upon the question whether a judge makes law. Of course he does. How can he help it?"

The reality is that judges are continually applying the existing rules to new fact situations and thus creating new laws.

To support this statement  Donoghue v Stevenson could be good example. On 26 August 1928, Mrs. Donoghue and her friend went to a shop occupied by Francis Minchella, and known as Wellmeadow Café, at Wellmeadow Place for a drink. Mrs Donoghue asked for a ginger beer, which her friend brought.It was supplied, as was customary at the time, in a opaque bottle. Mrs Donoghue poured out and drink some of the ginger beer, and the poured out the rest. At that point, the remains of a decomposing snail fell out of the bottle. Mrs Donoghue became ill. And sued the manufacturer. Up until this time, the usual remedy for damage caused by a defective product would be an action in contract but the option was unavailable to her. The reason is the contract was took place between her friend and the cafe owner. Subsequently, on 9 April 1929 Mrs Donoghue brought an action against David Stevenson, aerated water manufacturer in Paisley, in which she claimed £500 as damages for injuries sustained by her through drinking ginger beer which had been manufactured by the defendant.Nearly five years later (1932) the case was heard by the House of Lords, the case was called Donoghue v Stevenson [1932].  In 1932, the judges were asked to change the law four years after the event.The judges changed the law to say that back in 1928 David Stevenson owed her a duty to make sure there were no foreign objects in the bottle.  By applying this new law she won.They changed the law on 26 May 1932 and it had effect from 26 August 1928 onwards.There are two ways of looking at this.  First isthe law was wrong and the judges created new law which had retrospective effect (worked back in time). The other view is a "fiction", that the law was always the same and no one knew, the judges had found it, they "declared" the law.

Moreover, In the mid-nineteenth century the House of Lords developed the practice that it would be bound by its own decisions. This was reaffirmed in London Tramways Co v London County Council [1898] AC 375. Recently in the following case judges have introduced creat law.

1.,In Gillick v W. Norfolk Area Health Authority [1985] 3 All ER 402, the House of Lords was asked to consider whether a girl under sixteen needed her parents' consent before she could be given contraceptive services. One side claimed that teenage pregnancies would increase if the courts ruled that parental consent was necessary, and the other side claimed that the judges would be encouraging under-age sex if they did not. The House of Lords held, by a majority of three to two, that a girl under sixteen did not have to have parental consent if she was mature enough to make up her own mind. (Note: since Parliament had given no lead, the House of Lords had no option but to make a decision one way or the other.)

2. In Re S (Adult: refusal of medical treatment) [1992] 4 All ER 671, a health authority applied for a declaration to authorise the staff of a hospital to carry out an emergency Caesarian section operation upon a seriously ill 30 year old woman patient. She was six days overdue beyond the expected date of birth and had refused, on religious grounds, to the operation. The evidence of the surgeon in charge of the patient was that the operation was the only means of saving the patient's life and that her baby would not be born alive if the operation was not carried out. Stephen Brown P, made the declaration sought, in the knowledge that there was no English authority directly on the point. There was however, some American authority which suggested that if this case was heard in the American courts the answer would likely have been in favour of granting a declaration in these circumstances.

3. In Airedale NHS Trust v Bland [1993] 1 All ER 821, the House of Lords considered the fate of a football supporter left in a coma after the Hillsborough stadium disaster. The court had to decide whether it was lawful to stop supplying the drugs and artificial feeding that were keeping the patient alive, even though it was known that doing so would mean his death soon afterwards. Several Law Lords made it plain that they felt that cases raising "wholly new moral and social issues" should be decided by Parliament, the judges role being to "apply the principles which society, through the democratic process, adopts, not to impose their standards on society". Nevertheless the courts had no option but to make a decision one way or the other, and they decided that the action was lawful in the circumstances, because it was in the patient's best interests

Finally, The duty of the judge is to apply the law where he finds fit. The reality is that judges are continually applying the existing rules to new fact situations and thus creating new laws.

Matthew Hale: The History of the Common Law