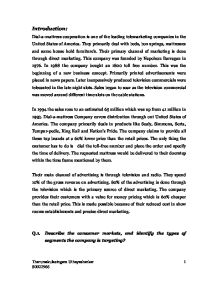 Dial-a-mattress cooperation is one of the leading telemarketing companies in the United States of America.

Introduction: Dial-a-mattress cooperation is one of the leading telemarketing companies in the United States of America. They primarily deal with beds, box springs, mattresses and some house hold furniture's. Their primary channel of marketing is done through direct marketing. This company was founded by Napoleon Barragan in 1976. In 1988 the company bought an 1800 toll free number. This was the beginning of a new business concept. Primarily printed advertisements were placed in news papers. Later inexpensively produced television commercials were telecasted in the late night slots. Sales began to soar as the television commercial was moved around different time slots on the cable stations. In 1994 the sales rose to an estimated 65 million which was up from 41 million in 1993. Dial-a-mattress Company covers distribution through out United States of America. The company primarily deals in products like Sealy, Simmons, Serta, Tempur-pedic, King Koil and Nation's Pride. The company claims to provide all these top brands at a 60% lower price than the retail prices. The only thing the customer has to do is dial the toll-free number and place the order and specify the time of delivery. The requested mattress would be delivered to their doorstep within the time frame mentioned by them. Their main channel of advertising is through television and radio. They spend 10% of the gross revenue on advertising. 80% of the advertising is done through the television which is the primary source of direct marketing. The company provides their customers with a value for money pricing which is 60% cheaper than the retail price. This is made possible because of their reduced cost in show rooms establishments and precise direct marketing. ...read more.

this creates confidence among the buyers and builds a state of loyalty. Another important feature of going online is that it is very cost effective. It is much cheaper than making television advertisements and relaying them indifferent time slots. It also allows the buyer or the consumer to take his or her time in under standing the product and specification which is available online unlike a television ad which passes in a flash. Credit card payments are tied up with reliable and secure companies which ensure safe trading online. This will allow people to feel safe making payments online. Overall, the company had a lot of advantages by going online. Q.3. In what ways would this company's direct marketing strategy need to be altered if it decided to change its media approach? Ans. Direct marketing is an interactive system. There is a two way communication between the marketers and the prospective customers.(study guide, selling and direct marketing). According to Pearson " direct marketing is an integrated system of marketing that uses one or more advertising media to effect a measurable response and / or transaction at any location, with this activity stored on a database".(Pearson 1996,p.17). a few of the advantages of direct marketing are as follows: 1. communicates directly to the target customer or prospect. 2. can personalize communication between the customer and the company, ie by name or variable messages. 3. promotional programs are relatively invisible when compared with general marketing. 4. specific actions are requested by the target audience. Eg purchase, inquiry. 5. most important is that a comprehensive database of the target audience drive the marketing programs. ...read more.

The four domain names are www.mattress.com, www.dial-a-mattress.com, www.dialamattress.com and www.dialamattress.net. This is one of the most important selling mechanisms that the company is using to attracting people to their web-site. Conclusion: Research has clearly shown that Dial-a-mattress is one of the leading companies in the bedding products sales in the United States of America. One of the most important features of this company is that it focuses more on service to its customers rather than any other organisation in that industry. It was one of the pioneers in direct marketing through direct response television, direct response radio and direct mailers during the 90's. To keep up with its competitors and technology, dial-a-mattress when online in 1994. It proved to be quite a success initially. Before venturing in to the internet marketing the company was targeting a market segment consisting of women between the age group of 25-44 and who had an annual income of $ 40,000 an more. When the company went online it found a new market segment which consisted of males with an average annual income of 150,000. This led to direct increase in the company's average cost per unit and increased the company's sales. The presence of the company online also strengthened the company's confidence and loyalty among its customers. Going online has proven to be cost effective and convenient. The company has offered discount coupons for online buyers and created a user friendly web page to attract customers. It also has linked its domain with major search engines in order to attract customers and establish its presence among the major online competitors. Going online will ensure the company to be successful among its competitors. 1 Tharumakulasingam Uthayashankar S0022966 ...read more.