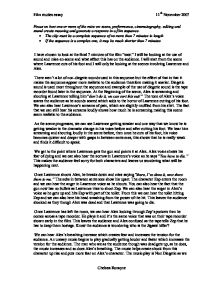 Focus on how one or more of the mise-en-scene, performance, cinematography, editing and sound create meaning and generate a response in a film sequence.

Focus on how one or more of the mise-en-scene, performance, cinematography, editing and sound create meaning and generate a response in a film sequence. * The clip must be a complete sequence of no more than 7 minutes in length * If the sequence is a complex one, it may be much shorter than 7 minutes. I have chosen to look at the final 7 minutes of the film "saw." I will be looking at the use of sound and mise-en-scene and what affect this has on the audience. I will start from the scene where Lawrence cuts of his foot and I will only be looking at the scenes involving Lawrence and Alex. There aren't a lot of non-diegetic sounds used in this sequence but the effect of that is that it makes the sequence appear more realistic to the audience therefore making it scarier. Diegetic sound is used most throughout the sequence and example of the use of diegetic sound is the tape recorder found later in the sequence. At the Beginning of the scene, Alex is screaming and shouting at Lawrence telling him "don't do it, we can sort this out!" ...read more.

He plays it and it's the same voice that was on their tape recorder shown early in the film. This leaves the audience and Alex confused as the tape tells Zep that he has to keep them hostage. Know the audience is wondering who is the Jigsaw killer? We can hear Alex's breathing increase which creates fear and increases the tension for the audience. An uneasy music begins to play gradually getting louder and faster which increases the tension for the audience. The man who we as the audience though was dead gets up, as he does, the music increases and so does Alex's breathing. The music helps create shock from this character up rise and puts more fear on Alex's character. The music play is Non Diegetic as we as the audience can hear but Alex can't. the music helps show the atmosphere of the scene, the fact that it's uneasy puts the audience on edge and wonder what is about to happen. When the 'dead man' speaks we recognise his voice as the same one as on the tape recorder and Alex and the audience become aware that he is the Jigsaw killer, this shocks the audience that the Jigsaw killer had been there the whole time. ...read more.

Then also as the scene progresses we see him getting paler and his skin colour turning slightly blue. There is also make - up on the 'dead man' as it looks like his head has been smashed even though he is alive. There is minor use of props as there is only simple ones such as a saw, a gun and a tape recorder. The tape recorder is the only prop that isn't used as a weapon which leaves the audience asking questions as to who the jigsaw killer is once the tape recorder is discovered. The lighting in these scenes is very simple as the bathroom is lit using a blue filter which makes the bathroom seem colder and more depressing. At the end of the sequence, the lights are turned of by Jigsaw and there is a green light behind him witch shows his outline. This makes Jigsaw seem mysterious as we cant see him it also suggests that he's secretive and there's still stuff we don't know. Once the door is shut, there is complete blackness and nothing can be seen, this creates fear with the audience as it plays on the childhood fear of the dark. ?? ?? ?? ?? Film studies essay 11th November 2007 Chelsea Ronayne ...read more.