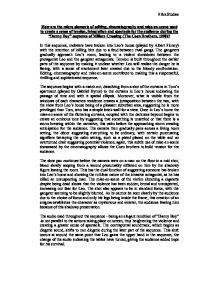 How are the micro elements of editing, cinematography and mise-en-scene used to create a sense of tension, integration and spectacle for the audience during the Danny Boy sequence of Millers Crossing (The Coen Brothers, 1990)?

How are the micro elements of editing, cinematography and mise-en-scene used to create a sense of tension, integration and spectacle for the audience during the "Danny Boy" sequence of Millers Crossing (The Coen Brothers, 1990)? In this sequence, mobsters have broken into Leo's house (played by Albert Finney) with the intention of killing him due to a feud between rival gangs. The gangsters gradually approach Leo's room, leading to a violent showdown between the protagonist Leo and the gangster antagonists. Tension is built throughout the earlier parts of the sequence by making it unclear whether Leo will realise the danger he is facing, with a sense of excitement later created due to the bloody confrontation. Editing, cinematography and mise-en-scene contribute to making this a suspenseful, thrilling and sophisticated sequence. The sequence begins with a match cut, dissolving from a shot of the curtains in Tom's apartment (played by Gabriel Byrne) to the curtains in Leo's house indicating the passage of time and with it spatial ellipsis. Moreover, what is visible from the windows of each characters residence creates a juxtaposition between the two, with the view from Leo's house being of a pleasant suburban area, suggesting he is more privileged than Tom, who has a simple brick wall for a view. ...read more.

The mise-en-scene of the shot features a stark contrast in colour, with the antagonists clothed in black, which has connotations of evil, against a white backdrop of the stairs. This causes the antagonists to stand out, and creates the sense that they are alien to the house, and should not be there, the audience resenting them for this. They appear to be well organised as there is symmetry in their movements; they are dressed alike, bearing the same weapons in the same manner and move at exactly the same pace. This makes them seem like a deadly combination, and allows the Coen's to indicate that the protagonist is up against lethal opponents. On a more basic level the two shots and wide shots featuring both antagonists leave the audience realising there is little hope of Leo's survival due to him being outnumbered and outgunned. In contrast to the constantly moving tracking shots of the antagonists, static shots are used for Leo that, along with his appearance, reflects his false sense of security. Also, each time the action cuts back to Leo the shot type is closer to him; the first being a long shot, the second a medium shot and the third being a medium close up. ...read more.

Leo is again attacked, this time by a car full of gunmen, coming out victorious as their car explodes. His completely calm, unfazed expression, the slow movements of the camera and - when revealed again in a long shot, revealing the protagonists grand appearance from head to toe - the mise-en-scene of an old man wearing pyjamas and firing a gun serve as a good juxtaposition to the carnage going on, thrilling the audience through the strangeness of it all. To signify his importance, Leo also occupies the centre of the frame. Much like the death of the previous gangster, the explosion of the car serves as a fitting end to the sequence, as the audience expects the antagonists to suffer for their actions, and so provides pleasure for the audience, gratifying their expectation of a dramatic and satisfying climax. I feel the described micro-elements of the "Danny boy" sequence successfully creates a sense of tension and spectacle, with the antagonists actions creating an exciting and fulfilling disequilibrium for the audience to observe, followed by the new equilibrium at the end of the sequence which allows the films narrative to progress in an interesting way. ?? ?? ?? ?? Film Studies ...read more.