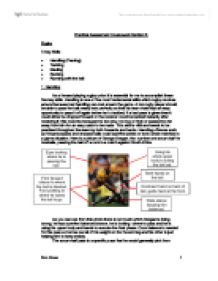 A2 Practical Assessment Of Rugby

Practical Assessment Coursework Section B Rugby 5 Key Skills: * Handling (Passing) * Tackling * Mauling * Rucking * Running with the ball 1. Handling As a forward playing rugby union it is essential for me to accomplish these five key skills. Handling is one of the most fundamental skills which rugby revolves around because bad handling can cost a team the game. A top rugby player should be able to pass the ball nearly inch perfectly so that his team mate has an easy opportunity to pass it off again before he is tackled, if a bad pass is given then it could either be dropped forward or the receiver could be tackled instantly after receiving it; this could be because it is too slow, too low or high or passed too far away from him for an easy catch to be made. This skill is vital and needs to be practised throughout the team by both forwards and backs. Handling offences such as forward passes and dropped b***s could sacrifice points or even whole matches in a game situation. Here is a picture of George Gregan, the number one scrum half for Australia, passing the ball off a ruck in a match against South Africa. As you can see from this photo there is not much which Gregan is doing wrong, he has a perfect balanced stance, he is looking where to pass and he is using his upper body and hands to execute the final phase. Good balance is needed for this pass so he has put all of his weight on the forward leg and his other is just helping him to keep steady. The scrum-half pass is a specific pass that he would generally pick from behind rucks and mauls. There are other passes which are used more widely throughout the team such as spin passes, non-spin passes and pop passes. ...read more.

Here is a good maul example of Argentinean players securing the ball and preventing the opposing side from reaching it. This is a very good maul because there is no chance for the opposition to reach the ball; the men are protecting the ball carrier in the middle so he cannot even be touched. The men in on the side are preventing other players grappling from the side and they are driving the maul forward in a very low position. The ball carrier is facing his men so they can help him secure it and stop the opposing team ripping it off him. A maul can also be made from a lineout, sometimes the team that caught the ball in the lineout want to make a maul so the opposition cannot get it, their plan would be to drive them backwards as far as possible so they gain territory, this could be very effective if near the try line because then if they drive over the line an easy try can be scored. From this picture it is quite difficult to see but the number 2 in the front of the photo had thrown the ball into the lineout, the man higher than anyone else has caught the ball and is on his way down with it. His other forwards are now gathering around to secure the ball and turn it into a maul. The ball catcher needs to turn his body along with the ball in the direction of his team-mates so that they can support him. Each forward would have a specific job, the two men either side of the jumper would grab hold of him on each side so no opposing men can get through, a man just outside of the lifters will then go straight and secure the ball so it cannot be got at, the hooker/thrower along with the other forwards will try and create a big pushing force and barrier either side and behind of these players to both push them forward and prevent the other team breaking through. ...read more.

The runner has to make the tackler commit to the tackle and then when the runner changes direction the tackler does not have enough time to readjust his positioning and follow the runner, especially when he is off balance. Other than individual moves like this there are moves used which are predetermined by the backs, they include the switches, miss passes and loops. These moves are practised before games so when they are carried out each player knows exactly what to do so hopefully no mistakes are made in the process. As a forward I am not usually a part in most of the running moves in the backs, the most moves I do are individual ones such as the spins, hand-offs and side steps. Although I have been playing as a prop forward and they are known to be the huge slow strong runners, I am actually quite fast and agile on my feet. When I run I always run very hard and powerfully with pace and I can often break through lines and tackles but there are some things in my running which I could improve, this includes my body position and my running direction. Often when I pick up the ball I will run straight at the opposition as fast as I can, but this sometimes creates problems; as I would be in an upright position it is quite easy for me to be tackled, it is also harder for me to break through tackles. I can also be wrapped up in this position, which can lead to the possibility of losing the ball. The other problem with my running is I can sometimes run sideways across the pitch instead of running at the opposition, the bad thing about this is I would be running away from my other forwards who I might need if I was tackled. Also I would not be gaining yards but risking losing some, especially if I was tackled or driven backwards. 1 Sam House ...read more.