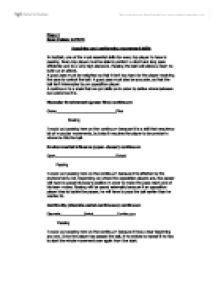 Page 1 Sean Halsey 12TST5 Acquiring and performing movement skills In football, one of the most essential skills for every top player to have is passing. Every top player must be able to perform a short and long pass efficiently and to a very high standard. Passing the ball well allows a team to build up an attack. A good pass must be weighted so that it isn't too hard for the player receiving the pass to control the ball. A good pass must also be accurate, so that the ball isn't intercepted by an opposition player. A continuum is a scale that we put skills on in order to define where between two extremes it is. Muscular involvement (gross-fine) continuum Gross______________________________Fine Passing I would put passing here on the continuum because it is a skill that requires a lot of muscular movements, but also it requires the player to be precise in where he hits the ball. Environmental influence (open-closed) continuum Open______________________________Closed Passing I would put passing here on the continuum because it is affected by the environment a lot. ...read more.

Difficulty (simple-complex) continuum Simple______________________________complex Passing I would put passing here on the continuum because although it is not as complex as some skills like a bicycle kick, it is still not an easy skill to get exactly right. Sometimes there is little time available for decision making and this makes it harder for the person playing the pass. Organisational (low-high) continuum Low______________________________high Passing I would put passing here on the continuum because it doesn't have a lot of sub routines and the ones it has are not easily practiced on their own. The skill really needs to be practiced as a whole skill in order for the player to improve at it. There are two main types of pass that every top footballer is required to be able to perform to a high standard: the short pass and the long pass. The perfect model for a short pass would be for the ball to reach the receiver as fast as possible without being so fast that he couldn't control it and as accurately as possible so that it is played where the receiver wants it, e.g. ...read more.

The ball is either passed first time or controlled and then passed (depending on the coach's preference), and once the pass has reached the receiver, the person who played the pass jogs or sprints to the back of the opposite queue of players. This is continued for about ten minutes, and it can also be used before a game so that players can get their "passing range" and for them to get their touch right. To practice a moving short pass, a distance of about one hundred yards should be measured out using cones. The players must get into pairs with a ball between each pair and must pass the ball between each other whilst moving forwards. They should continue doing this until they reach the end cone. A simple but effective way to practice a long pass is to get the players into pairs with a ball between each pair. The players should then spread out from their partner about thirty yards away, and pass the ball along the floor or in the air to each other. This should be done for about five to ten minutes, and will also help improve the player's control and touch. ...read more.