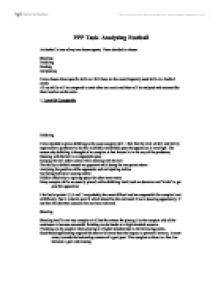 PPP Task- Analysing Football As football is one of my two chosen sports, I have decided to choose Shooting Dribbling Heading and passing I have chosen these specific skills as I fell these are the most frequently used skills in a football match. All my skills will be compared to each other on a scale and then will be analysed and reasoned for there location on the scale. 1) Level Of Complexity Dribbling I have decided to place dribbling as the most complex skill. I feel that the level of skill and ability required for a performer to be able to dribble and dribble past the opposition is very high. The reason why dribbling is thought of as complex is that factors lie in the way of the performer, Running with the ball to a respectable pace Keeping the ball under control while running with the ball The ability to dribble around an opponent while doing the two points above Analysing the position of the opponents and anticipating tackles Not being tackled or loosing control Dribble effectively to open up space for other team mates Many complex skills are usually placed within dribbling itself, such as dummies and "tricks" to get past the opposition. I feel bullet points 2,3,5 and 7 are probably the most difficult and are responsible for complex level of difficulty. ...read more.

Heading I have placed heading in second place for the following reasons. Heading requires Powerful and explosive leg movements to out jump an opponent and also required movement of the arms and more essential the neck when power is needed to put into the ball. Occasionally running and then jumping is required to gain dominance of the air in order to win the header that is why I consider it to be a gross muscular movement. Shooting There is little between shooting and passing but I have placed shooting ahead due to the fact that when shooting power is not restricted. Therefor more gross muscular movement is required in shooting. When shooting the performer must use the gross muscles in the legs and in the body to gain power on the shot. However some shooting techniques, i.e., Lobs or chips require fine movements. Hence shooting is only just above the halfway point towards gross. Passing Passing in principle is almost the same as shooting, it is a connection between the ball and the foot to make the ball move. But the difference is in shooting power is essential to beat goal keepers where as passing on occasions can be simple fine movements of the leg. But if crossing the ball or performing a long ball, more gross muscles in the leg are required. But all in all I have decided that halfway between fine and gross is a suitable position. ...read more.

Dribbling Dribbling has practically no organisation. I say this because when running with the ball the performer can only alter or change his dribbling when a challenge is made, but even then its is instinctive or instantaneous The only form of organisation involved with dribbling is choosing a direction to run with the ball. The rest is down to what the opposition does to prevent the performer and therefor there is no organisation. 5) Continuity Dribbling Dribbling is considered to be serial because it involves running and momentum. Dribbling the ball with momentum means that the skill is being performed and this can be over a prolonged period of time. Heading This is some ways similar to dribbling running is involved and therefor categorises it as serial. One needs a strong run and jump in order to meet the ball first. The skill is achieved once the head connects with the ball. Shooting Shooting is a discrete, as it has a brief process. This is due to success. If the shot was prolonged it would either be intercepted or blocked. It is a single piece of skill. And only involves striking the ball. Passing And finally passing like shooting, is a discrete skill. This is basically due to the skill being in the same nature as shooting. It is a quick piece of skill and is brief as it is a single movement and not prolonged. ...read more.