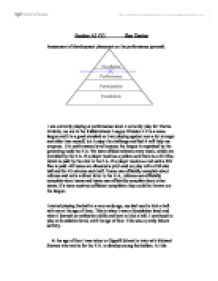 Assessment of development placement on the performance pyramid - football.

Section A3 (V) Ben Davies Assessment of development placement on the performance pyramid. Excellence Performance Participation Foundation I am currently playing at performance level. I currently play for Thorns Athletic; we are in the Kidderminster League Division 1.It is a mans league and it is a good standard so I am playing against men a lot stronger and older than myself, but I enjoy the challenge and feel it will help me progress. It is performance level because the league is organised by the governing body the F.A. We have official referees every week, which are provided by the F.A. If a player receives a yellow card there is a �12 fine, which is paid by the club to the F.A. if a player receives a red card a �36 fine is paid. All teams are allocated a pitch and we play with a full size ball and for 45 minutes each half. Teams can officially complain about referees and write a direct letter to the F.A., referees can officially complain about teams and teams can officially complain about other teams. ...read more.

This was physical recreation. I started playing at performance level at the age of six. I joined Forest Falcons, this was a well set up club and well organised. I played in the Stourbridge League Division 1, run by the F.A. and official rules and referees were used. Games were played on smaller pitches with a size 4 ball and only 30 minutes a half. It was a huge step for me to jump from participation level to performance. I did not enjoy Forest Falcons I think it was too young to start playing competitive football, I did not like the managers only wanting to win and being shouted at when I made a mistake. This was at a sporting level. I left Forest Falcons after about a season and joined Hagley, I think Hagley was a drop from performance to participation level because we only played friendlies and trained, there was no league and the manager of either side would referee. ...read more.

In a few seasons I would like to go to trials for maybe Lye town or Cradley town, as I feel I have the ability and will be stronger after two or three seasons of playing against men. Both Lye Town and Cradley Town are semi - professional teams and so it would be a good achievement to play for either of them and would probably move me higher up in the performance section of the pyramid. Also all through my football career I have played for intrinsic values only, but playing for a semi-professional side would mean I would get paid and so there would be some extrinsic rewards. I think a factor preventing me from reaching excellence was that I started playing football too young as when I was at the age of 13 I had a lot of injuries as I was growing and playing to much sport. However it was through my own choice to play this sport, there were no external factors pushing me to play. Although I don't know if I had the natural ability to reach excellence but I think I would have progressed further up the pyramid, if it weren't for injury. ...read more.