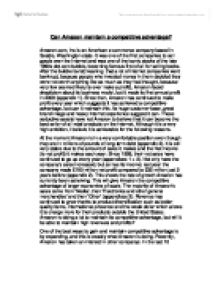 Can Amazon maintain a competitive advantage?

Can Amazon maintain a competitive advantage? Amazon.com, Inc is an American e-commerce company based in Seattle, Washington state. It was one of the first companies to sell goods over the Internet and was one of the iconic stocks of the late 1990s dot-com bubble, becoming famous first of all for selling books. After the bubble burst(meaning that a lot of internet companies went bankrupt, because people who invested money in them decided they were not worth anything like as much as they had thought, because very few seemed likely to ever make a profit), Amazon faced skepticism about its business model, but it made its first annual profit in 2003 (appendix 1). Since then, Amazon has continued to make profit every year which suggests it has achieved a competitive advantage, but can it maintain this. Its huge customer base, great brand image and heavy Internet experience suggest it can. These seductive assets have led Amazon to believe that it can become the best seller of all retail products on the internet. ...read more.

If this were to happen, I think that Amazon would have to start selling a wider range of products to sustain their competitive advantage. Although Amazon are facing increasing competition,from the reasearch I have gathered, I believe they do maintain and will maintain a competitive advantage. I think the main reason for this is because they are trusted and have a good reputation. Amazon were one of the Internet's pioneers and they are certainly one of the most experienced e-commerce companies in the world. They have maintained a profit since 2003 (appendix 2) an the fact that the company has gone international also ensures competitive advantage, they are now able to sell to many different consumers ranging from many age groups to many regions. Overall, I think that if Amazon stay in the steps they are taking at the moment, they can maintain their competitive advantage. Although there is new competition, these other company's do not have the same name that Amazon hold for selling goods on the internet. I believe that the competition will find it hard to compete against such a large transnational corporation. ...read more.