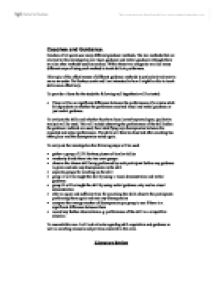 Coaches and Guidance. Coaches of all sports use many different guidance methods. The two methods that are relevant to this investigation are visual guidance and verbal guidance although there are also other methods used by coaches. Within these two categories are also many different ways of using each method to teach skills to performers. This topic of the effectiveness of different guidance methods is particularly relevant to me as an under 13s Hockey coach and I am interested in how I might be able to teach skills more effectively. To provide a focus for the study the following null hypothesis will be tested: * There will be no significant difference between the performance of a reverse stick hit dependent on whether the performers received visual and verbal guidance or just verbal guidance. To evaluate the skills and whether they have been learnt/improved upon, qualitative analysis will be used. This will include observing the performance of the skill before the guidance methods are used, then identifying any discrepancies between the expected and actual performance. The skills will then be observed after coaching has taken place and the discrepancies noted again. ...read more.

Also, for a beginner, using a visual demonstration can be a good motivator for them. For more elite performers, demonstrations can be used to highlight specific aspects of a skill being performed incorrectly. Another advantage is that another person other than the coach can perform the demonstration. This allows the coach to point out specific areas of the skill that are important. Demonstrations by learners with weaknesses can also be useful to highlight the differences between good and bad technique. On the other hand, demonstrations also have their disadvantages. Social Learning Theory reference suggests that observational learning only occurs if the learner: * pays attention to the demonstration * remembers the information displayed * posses the ability to carry out the movement * has the motivation to practise When these points are considered, it can be seen that demonstrations do not cause automatic learning. The performer still has to physically produce the movement observed which is not an automatic reaction. Visual materials can also be used to help teach a skill. Examples of these are wallcharts, diagrams, videos, three-dimensional models etc. ...read more.

conducted another study between visual and a combination of manual guidance and mental rehearsal. The group who were exposed to the visual guidance were shown the skills both on videos and by personal demonstrations by the coach. The other group were told to visualise and imagine the feelings of the movement before being able to physically practise the skills. The results of this study showed that the group who practised mental rehearsal first and were then aided by manual guidance performed skills consistently better than the group that were only given visual guidance. However, this study can be criticised for its lack of controls on the groups, as there was nothing to prevent the visually guided groups from using mental rehearsal. Dr. T. Irving (North of England Goalkeeper Coach) has also suggested that visual guidance is the best method to use when teaching skills for any sport, but he has not supported his statement with evidence. Overall, there seems to be a large amount of evidence that supports the view that visual guidance is more affective than any other form but the null hypothesis of this investigation can still be disproved by conducting the experiment by the method previously stated. ...read more.