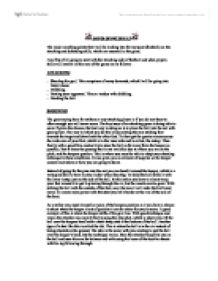 DEVOLOPING SKILLS The major coaching points that I will be looking into for my sport (football) are the attacking and defending skills, which are essential to the game. I am first of all going to start with the attacking side of football and what players skills will involve in this area of the game are as follows: ATTACKING . Shooting for goal. This comprises of many demands, which I will be going into Detail about. . Dribbling. . Beating your opponent. This co-insides with dribbling. . Heading the ball. SHOOTING The great saying here for strikers or any attacking player is if you do not shoot to often enough you will never score. The key issue of an attacking game is being able to score if given the chance; the best way in doing so is to place the ball into the net with great power. The way in which you do this is by pointing the non-striking foot towards the target and draw back the other foot. To then get the greater accuracy use the wide area of your foot, which is in the inner side and is called, the instep. Then finally with a good firm contact try to steer the ball as far away from the keeper as possible. But at times the passing shot is not available due to where you are on the pitch, and the keepers position. This is where you must be able to adapt your shooting technique to these conditions. It also gives you an element of surprise so the keeper cannot read where or how you are going to shoot. Instead of going for the pass into the net you can bend it around the keeper, which is a very good skill to have in your locker when shooting. To bend the ball strike it with the lower instep just on the side of the ball. ...read more.

The chip shot can be hard to do when running with the ball so first of all start off with the ball stationary, and just chipping it (by stabbing the bottom of the ball) to your partner 12 yards away. Next stage is to take a touch to bring the ball out of your feet and chip the ball to your partner 12 yards away while it is slightly rolling. Then the next stage of the drill is to run at pace and practice stabbing the ball to make it come of the ground. The final stage will then be to run at the goal with a keeper in the nets and as he comes out practice chipping the keeper. But the chip does not always go high in the air and over the keepers head, sometimes it is when the keeper rushes out and you wait as long as possible for him to go down before you d**k a little chip over him as he goes to the floor. The practice of the long shot can only be achieved through practicing striking through the ball with power, which is controlled. The player should try pushing the ball out of his feet and keeping his body over the ball and striking through the middle of the ball. If the player leans back when striking the ball with power it will not be under control and will usually end up flying high then wide of the target. If the player keeps practising his technique of striking the ball with power from a distance he will feel more at ease and positive at having a go from a distance to catch the keeper unawares. A drill for volleying is built up from the basics or letting the ball drop in front of you and on the way back up hitting it to your partner who is 12 yards away. ...read more.

Another practice can be the keeper in between two cones which are goals and have a player shooting on both sides so the keeper has to get back up quickly and react to every shot coming in. Stab tackle This tackle is used when your body cannot be used to challenge. So instead as you approach your opponent at the side, you nip in front of him and stab the ball away from him with you out stretched foot. This tackle can be used to start your own attacking moves as well. As if you can see a team mate unmarked as you stab the ball away you can aim for your team mate and then look for the reply while your opponent is out of position. Shot stopping: The key to shot stopping is knowing your angles of the goal. As the smaller the goal looks to the attacking team the more pressure they have of finding the back of the net. A good shot stopper will have to be agile in the goalmouth. He must have a good strong hand to force the ball away from the danger are. But more importantly a shot stopping keeper must have a good pair of hands so he can keep hold of the ball when shot at. To be good at shot stopping you must keep your eye on the ball at all times when it is coming towards you and hold onto the ball tightly. A keeper must have bravery, as there are times when the ball is bouncing about and he must get his body in the way even with the attackers coming in hard. The keeper must also have a good judgement, in knowing when to come out of his goal and when not to, as making just one mistake can cost the team (conceding a goal) so the keeper has a vital role to play with decision making. ...read more.