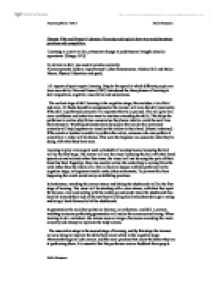 Discuss 'Fitts and Posner's' phases of learning and explain how you would structure practices and competition.

Discuss 'Fitts and Posner's' phases of learning and explain how you would structure practices and competition. 'Learning is a more or less permanent change in performance brought about by experience.'(Knapp 1973) To elevate in skill, you need to practise correctly- 'Correct practise leads to improvement' (John Honeyrourne, Michael Hill and Helen Moors, Physical Education and sport) All aspects of sport require learning. Despite the speed at which different people can learn new skills, Fitts and Posner (1967) introduced the three phases of learning to skill acquisition; cognitive, associative and autonomous. The earliest stage of skill learning is the cognitive stage; this includes a lot of trial and error. All faults should be recognised or the learner will learn the skill incorrectly. If the skill is performed correctly it is important that he is praised. This will give him more confidence and make him want to continue extending his skills. This helps the performer to realise why failure occurred so they know what to avoid the next time they attempt it. Watching demonstrations by people that can do the movement correctly will help beginners to visualise the actions in their head. ...read more.

The learner will be able to associate the movements produced with the mental image they have. Positive feedback will let the performer know they are doing the movements right which in return will enhance their performance. Negative feedback will let them know what they are doing wrong and will help them to correct themselves. Sometimes learners will return to cognitive stage to make sure they are performing the basic skills correctly. This is also the stage where motor programmes are formed- this is a sequence of movements is stored in the long-term memory of the performer. Learning to do a lay up in basketball requires you to be able to run, dribble and concentrate on where you're going and what's in front of you all at the same time. Learners will not face all these problems at once; it will be taken one task at a time. The coach/teacher will carry out practise and drills to teach the learners the skills separately until all skills where at a high enough level to perform and then put them together. Now the leaner has learnt to stand and hit the shuttlecock they will now focus on ways of making the performance better, less errors, fluent movements. ...read more.

If they are still at the cognitive stage, the practises will be fairly easy and will focus on the basics, such as dribbling, shooting, passing etc. If the learners are at the associative stage the practise will need to be a bit harder as the learners will be coming to learn new tings and to improve the performance thy already have, so the practices would involve things such as, small team games, and 3-point shooting. At the autonomous stage the performer will need harder practise but at this stage they may have already taken part in most drills so will just be doing more vigorous training, maybe for longer, but making it harder in little ways. Before starting the practise the area in which the practise is going to be carried out in, needs to be big enough and safe enough. Any other objects needed for practise has to be checked for safety. You also need to consider the weather conditions as this may affect the game if it is an outside sport. When competitions are being formed, the ability of the players should be the main concern. The word competition means to compete, and if the people you are working with/against are not good enough or way to good then there is no point as it is simply not a fair competition. ...read more.