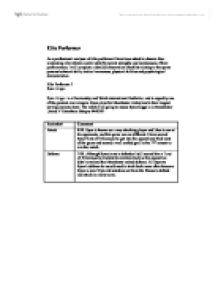 Elite Performer As a professional analyser of elite performer I have been asked to observe four contrasting elite athletes and to identify current strengths and weaknesses of their performances. I will complete a detailed observation checklist relating to the sports persons technical skills, tactical awareness, physical abilities and psychological characteristics. Elite Performer 1 Ryan Giggs Ryan Giggs is a Premiership and Welsh international footballer, and is arguably one of the greatest ever wingers. Ryan plays for Manchester United and is their longest serving current player. The match I am going to assess Ryan Giggs in is Manchester United V Tottenham Hotspur 04/02/07 Technical Comment Attack 9/10. Ryan is known as a very attacking player and likes to run at his opponents, and this game was no different. I have scored Ryan 9 out of 10 because he got into the oppositions third most of the game and scored a well crafted goal in the 77th minute to win the match. Defence 7/10. Although Ryan is not a defender I still scored him a 7 out of 10 because he tracked his markers back so the opposition didn't overload the Manchester united defence. To improve Ryan's defence he would need to track back more often however Ryan is now 33yrs old and does not have the fitness to defend and attack in every move. Control 10/10. Ryan's control is superb and is able to control the ball exactly where he wants it. It's not just Ryan's ability to control the ball but also his ability to control the game, their were times in the game where Tottenham were breaking the flow off Manchester united attacks but Ryan just took control of the game and slowed the game down so they were back in control. Use of skill 8/10. Ryan is one of the most experienced footballers in the premiership and is able to use his skills at the correct time to make them most effective. ...read more.

Ricky demonstrated good balance and was able to duck out of punches and still produce a powerful punch on the move. Elite Performer 3 Andrew Flintoff Andrew Flintoff is an England international cricketer and classed as the worlds best all-rounder in bowling and batting. Andrew Flintoff is known for his aggressive batting and his fast bowling. The match I will be assessing Andrew Flintoff in is England V Australia one day international 02/02/07 Technical Comment Attack 9/10. Andrew's attacking shots are some of the best shots known to cricket, he has the ability to hit the ball very far with a lot of control. In this one day match Andrew went out for a small total. However his attacking shot were still very good and caused the opposition problems. Defence 6/10. This element let Andrew down in this particular match and is normally a strength for Andrew. Is defensive shots were just slightly out of time but at the level he is playing just one small mistake can cost you a wicket. Control 6/10. Another normal strength for Andrew but again hasn't been displayed in this match. Most of Andrews shots were catchable and did not seem to be in control of them. Use of skill 8/10. Andrew showed a good use of skill with his shot selection, he knew when to play back foot defensive shot or a reverse sweep for example. Tactics Comment Field set-up 8/10. When Andrew's bowling the field set up changes and they bring in two slips on the right of the batsman or left if he's left handed, with Andrews pace and swing on the ball the batsman may get a small touch on the ball and go straight into one of the two slips. This is a very common used tactic for swing bowlers and worked well in the game making every ball hard for the batsman to deal with. ...read more.

I feel Andrew Flintoff on the other hand was unable to deal with all the pressure from the Australian bowlers with the likes of Shane Warne, Brett Lee and Glen McGrath some of the best bowlers in the world. And this showed when he was batting and didn't look confident, however Andrew Flintoff has a very strong character and although not performing whilst batting he didn't give up and showed great determination and turned it around when bowling and fielding. Physiological is what makes are elite performers so great their ability to sprint for 90mins and still cross a ball accurately or box for 12 rounds whilst taking punches and still have the energy to fight back. One of the barriers holding players back is age and this is the story for Ryan Giggs as he is getting older and towards the end of his career he is loosing fitness which means he isn't able to track back as much and make as many runs, however he still showed great agility and skill to beat his players and still one of the great wingers in the world. Where as on the other hand Ricky Hatton is still to reach his prime and has an extraordinary physiological ability, with his speed, power and balance all nearly 10/10. This is what makes Ricky Hatton such a good fighter and still undefeated to this day. Andrew Flintoff has to be extremely fit for all the test matches and one day internationals he plays especially as an all rounder where he will be bowling many overs and then batting high in the order. Andrew showed great speed and power in his bowling and bowled many overs consistently with accuracy and speed, this shows great determination and physical ability. Jason Robinson is another elite performer with superb physiological ability and is one of the fastest rugby union players in the world. However it is not just Jason Robinson's blistering speed but it's his agility which makes him one of the best fullbacks/wingers in the world. ?? ?? ?? ?? ...read more.