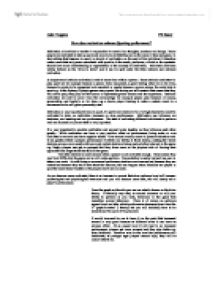 How does motivation enhance Sporting performance?

Luke Vaggers PE Essay How does motivation enhance Sporting performance? Motivation of one kind or another is responsible for most of our thoughts, emotions and doings. Some people are motivated to take up sport and some to do all that they can in the name of fame and glory. In fact nothing that happens in sport, is devoid of motivation on the part of the individual it therefore makes sense that any person associated with sport be it the coach, performer, official or the spectator should have some understanding or appreciation of the concept of motivation. Motivation has been widely defined as the 'drive to strive' and it can be split under the titles intrinsic and extrinsic motivation. In simple terms intrinsic motivation is said to come from within a person. Some intrinsic motivators to play sport are for example because a person finds enjoyment, a good feeling when he or she wins, because he wants to be recognised and respected or maybe because a person enjoys the social side to sport e.g. At the Sydney Olympic games many sports like boxing are still amateur that means that they will not be paid, they play for the honour of representing their country and the experience. ...read more.

As you become more motivated, there is an increase in arousal that at an optimum level will increase psychological and physiological awareness and you will become more alert, this will clearly aid a player's performance. From the graph on the side you can see what is known as the drive theory. It basically says that, as arousal increases so will your ability to perform as you wish, behaviour in the game that resembles normal behaviour. There is of course an optimum arousal level and after which performance decreases (seen from the 2nd graph-Inverted U theory) but you will definitely have to be aroused and 'be up for it' to play well. It would incorrect for me to leave it on the point that increased arousal is only good because at different levels it can have an adverse effect. At an expert level it will lead to an increased performance, players get more pumped and they play better e.g. John McKnroe. However at a novice level the performance will deteriorate, at younger ages players cannot cope, they will be unsure what to do. ...read more.

Feedback is another very important factor that must be considered when in training, and if you are motivated and keen to improve then you must be able to listen to advice and adapt in training. More motivated performers are more likely to accept feedback and so are more likely to improve. Being more motivated to improve increases your care in sport not only in the actual game but also in training and in game preparation. Preparation for sport is very important, it can be the difference between winning and losing it can give that edge needed over your opponent. Psychological aspects of short-term preparation include the ability to cope with anxiety/stress, being at the optimum level of arousal and having the set goals in mind to motivate them properly. Training without focus is completely pointless and the performer will gain no benefit from it. If a player is motivated he will strive to improve and so will put everything into training, preparation, and the match. A motivated player will put a lot of effort into everything that he or she does; with goal-setting, focused hard training, great preparation and a great ability to listen, the ability to take criticism constructively and work hard at faults a performer will reach his potential in his sport. ...read more.