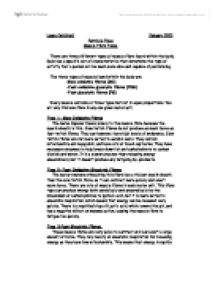 Laura Cwiklinski January 2002 Portfolio Piece Muscle Fibre Types There are three different types of muscle fibre found within the body. Each has a specific set of characteristics that determine the type of activity that a person will be much more able and capable of performing. The three types of muscle found within the body are: -Slow oxidative fibres (SO) -Fast oxidative glycolytic fibres (FOG) -Fast glycolytic fibres (FG) Every muscle contains all three types but not in equal proportions. You will only find one fibre in any one given motor unit. Type 1: Slow Oxidative Fibres The nerve impulse travels slowly to the muscle fibre because the myelin sheath is thin. Slow twitch fibres do not produce as much force as fast twitch fibres. They can however, have high levels of endurance. Slow twitch fibres are far more suited to aerobic work. They contain mitochondria and myoglobin, and have lots of blood capillaries. They have necessary enzymes to help break down fat and carbohydrate to carbon dioxide and water. It is a slower process than releasing energy anaerobically but it doesn't produce any fatiguing by-products. ...read more.

This means that less reactions are able to take place between the troponin and the calcium due to less calcium ions being present. This results in low contractile speed, which means that movement is slower, hence the name slow witch fibre. In terms of function, a slow oxidative fibre has a high aerobic capacity. This is due to the large number of mitochondria found in this muscle type. Mitochondria are the site at which aerobic respiration takes place in a cell, and provide energy for muscle contraction via ATP. This means that the anaerobic capacity of this fibre is low. The fatigue resistance is very high because they have a high aerobic capacity. This means that lactic acid that may accumulate in the muscle can be oxidised to prevent fatigue. However, the strength of a motor unit is low which means that the force produced is not as high as the force found in fast twitch fibres. Fast oxidative glycolytic fibres contain between 300 and 800 fibres per motor neurone. This is because the size of the motor neurone is large. The type of myosin ATPase is fast which results in the rapid breakdown and release of energy. ...read more.

The contractile speed found in a fast glycolytic fibre is fast because the motor neurones are large and are able to exert a large force. The fatigue resistance is low because there are not many mitochondria found in the fibre but energy is rapidly released, so the muscle tires quickly. However, the strength of each motor unit is high. This is because the neurone is able to activate a greater number of muscle fibres, meaning that each motor unit is very strong and can create a high force. "The distribution of muscle fibre type can help to determine the type of sporting activity an individual is most suited to". In terms of my sport, long jump fast twitch muscle fibres dominate. This is because this activity requires large amounts of instant energy, lasting for only a few seconds, with full recovery between repetitions. This is due to the explosive nature of the event. The movements are rapid and require maximum force with precision timing. One reason for this is that an adaption occurs in the stores of ATP and PC within the muscle cell sarcoplasm are increased. This causes more energy to be available more rapidly and increases the maximum possible peak power output of a muscle. ...read more.