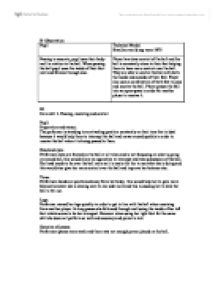 Player has close control of the ball and the ball is constantly close to their feet helping them to have more control over the ball. They are

B- Observation Pupil Technical Model: Brazilian world cup team 1970 Passing is accurate, pupil uses their body well in relation to the ball. When passing the ball pupil uses the inside of their foot well and follows through also. Player has close control of the ball and the ball is constantly close to their feet helping them to have more control over the ball. They are able to control the ball with both the inside and outside of their feet. Player also uses a combination of both feet to pass and receive the ball. Player passes the ball into an open space in order for another player to receive it. B1 Core skill 1- Passing, receiving and control Pupil: Preparation and stance: The performer is standing in an attacking position constantly on their toes this is ideal because it would help them to intercept the ball and move around quickly in order to receive the ball when it is being passed to them. Head and eyes: Performers eyes are fixated on the ball at all times and is not focussing on what is going on around her, this would allow an opposition to intercept and take possession of the ball. Her head needs to be over the ball more so it is easier for her to see what she is doing and this would also give her more control over the ball and improve her balance also. ...read more.

Head and eyes: Performer has constantly got his eyes on the ball when performing his techniques. He also manages to keep an eye on his surroundings, constantly looking out to see if an opposition is near. His head is strong and doesn't move from side to side. Torso: He has a straight body composition and is in line with the ball at all times. His body is positioned over the ball and this gives him more control when dribbling against an opponent. Legs: Player is quick and agile on their toes. He performs a variety of step overs. He keeps the ball close to his feet and this allows him to control the ball better at speed. He also runs with the ball at speed and does this well. B- Observation Pupil Technical Model: Carlos Alberto: Pupil did not hit the ball with the correct part of her foot. Although she aimed her shots were not too accurate and the ball ended up wide the majority of the time. Player times the shot well and his follow through is accurate with lots of power. He uses the laces of his boots to get a low pass on the ball. His upper body and torso is over the ball. B3 Core skill 3- Shooting Pupil: In general, performer did not perform so well oveall as she was kicking the ball with the wrong part of her boot she used her toes where it wasn't necessary and failed to use the inide and outside of her feet. ...read more.

B5 Core skill 5- Tackling, Jockeying and closing down Pupil: Block tackle: Head and eyes: Her eyes focussed on the ball as the opposition is closing down against her. She uses her eyes and head movement to trick the oppent into thinking that she is heading in a certain direction. Her head is also over the ball helping her to have more control over it. Torso: She has her full body behind the ball at all times and uses her torso to again trick the opponent into going in a certain direction. Legs: She is always on her toes whilst the opponent is approaching her, weight is transferred forwards as she attemps to tackle with the inside of her right foot. Ankle and leg are kept firm throughout the tackle. Technical Model: Head and eyes: Eyes are focussed well on the ball as the opponent approaches him. He looks around constantly to see what is going on around him. Torso: Player stands in an attacking position ready for the opposition. He is ready to move with his arms slightly away from his body giving him full balance and stability so that he wil not fall or lose control of the ball. Legs: Player tackles the ball with the inside of his foot and the ball becomes stuck between his foot and the opponents. In order to gain possession he gets his foot right under the ball allowin him to have more power over the ball as he is using the strength of his leg in order to do this. ...read more.