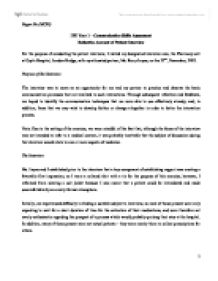 IPE Year 1 - Communication Skills Assessment Reflective Account of Patient Interview For the purpose of conducting the patient interview, I visited my designated interview area, the Pharmacy unit at Guy's Hospital, London Bridge, with my allocated partner, Ms. Kerry Layne, on the 22nd, November, 2002. Purpose of the Interview The interview was to serve as an opportunity for me and my partner to practice and observe the basic communication processes that are involved in such interactions. Through subsequent reflection and feedback, we hoped to identify the communication techniques that we were able to use effectively already, and, in addition, those that we may wish to develop further or change altogether in order to better the interaction process. Note: Due to the setting of the exercise, we were mindful of the fact that, although the focus of the interview was not intended to refer to a medical context, it was probably inevitable that the subject of discussion during the interview would relate to one or more aspects of medicine. The Interview Ms. Layne and I established prior to the interview that a key component of establishing rapport was creating a favorable first impression, so I wore a collared shirt with a tie for the purpose ...read more.

As the interview process began, I felt somewhat apprehensive, due to the fact that I had never been involved in an interview of such a kind before. I commenced the interview by asking Mrs. X about the specific nature of her visit. This was an open question, and was intended to eradicate any notion that suggested an interrogative mood about the questioning; it was also posed in such a way as to invite the patient to answer with a response that would be more elaborative than one that would be elicited by a closed question, therefore immediately increasing the extent of patient involvement in the development of the conversation. It emerged that she, and most members of her immediate family, had a high blood cholesterol level due to genetic influences, and were therefore prone to coronary heart disease. On this particular occasion, she, and her mother, who was also present in the seating area, was at Guy's Hospital for a routine examination, and had been referred to the pharmacology unit to collect their medications. She even further elaborated by discussing, without prior urging, the various prescriptions that she and her family had used throughout their lives, with surprising detail. ...read more.

Otherwise, my partner deemed my communication skills to be adequate. However, on further reflection, I felt that, at times, I had exhibited disrespect to the patient by interrupting and completing responses for her before she finished speaking (one of McKay's twelve blocks to effective listening), because I had been able to anticipate her response ahead of time and, in addition, because I wished to introduce another topic to the conversation. At the end of the interview, the patient expressed that she had enjoyed the conversation, and, although this may simply appear to be gesture of courtesy, it is likely that she found our communication techniques to be sufficiently satisfactory at the least. Relevance for Future Practice I considered this exercise to be an invaluable learning experience and very relevant for future practice, as a good doctor must be able to communicate effectively with his or her patients in order to establish a good working relationship, and this is dependent on his or her ability to establish and maintain rapport, to demonstrate empathy, and to close a consultation. In addition, despite the fact that the interview was not a real doctor-patient consultation by any means, it nevertheless provided a practical introduction to working in a clinical setting. Roger Ho (MC09) 1 ...read more.