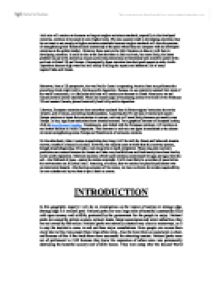 Acid rain will continue to decrease as long as tougher emissions standards, especially in the developed countries, continue to be raised to new, higher levels.

Acid rain will continue to decrease as long as tougher emissions standards, especially in the developed countries, continue to be raised to new, higher levels. The one question mark is developing countries; they do not want to set comply to higher emissions standards because tougher standards will slow the process of strengthening their industries (and economies) to the point where they can compete with the developed countries on the global market . However, there seems to be little literature or data on Acid Rain in developing countries. It could be due to the fact that there is little acid rain, but more likely, the latent problem has yet to be studied as closely as the ultra-meticulous environmental and scientific sector of the acid rain inflicted US and Europe. Consequently, these countries have had good reason to study Acidic Deposition because high water and soil acidity is killing the aquatic and terrestrial life of many regions' lakes and forests. Moreover, from a US perspective, the vast Pacific Ocean is separating America from any pollutants the prevailing winds might waft in, forming acidic deposition. ...read more.

Assuming, of course, that we continue to play the policeman over environmental hazards. After having set nature off its course, we have no choice but to take responsibility for our mistakes and try our best to put it back on course. INTRODUCTION In this geography enquiry I will do an investigation on the impact of tourism at stanage edge. Stanage edge is a national park. National parks are very large areas of beautiful countryside filled with open scenery and wildlife, protected by the government for the people to enjoy. National parks are owned by private owners, national trusts, forest commission and water authorities, they are not owned by the nation. National parks are normally situated very close to motorways, so it is easy for tourists to come in and out from major conurbations. More people can access them easily due to this even people from large urban areas. Also the time taken on motorways is short, and because of this it has made them more successful fro attracting tourists. ...read more.

The organizations who own the peak district are shown in figure 1:- Figure 1-Land Ownership of The Peak District National Park National Trust Forestry Commission Water Companies Ministry Of Defense County Council Private Peak District 5% 1% 14% 0% 0% 78% Stanage edge is in the peak district. It is a natural landform called an escarpment which is a hill with one steep side (scarp slope) and a gentle side (dip slope). It was formed in this way because of the layers of material. Tectonic plates on the mantle move (but not noticeable by us) and when two move towards each other, continental crust is moved upwards, but for instance one side is hard lock and the other soft then one will go over the other forming an escarpment and it also happen because of deposition over million of years and stanage edge stick out because it's hard rock unlike it's surroundings. It is high as 400 meters and because of this it has made it a big attraction because you can see over Castleton and the scenery. Many activities are done here but import over deposition of the foot path which I will study about. ...read more.