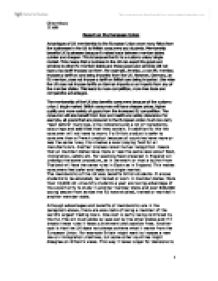 Advantages of UK membership to the European Union cover many fields

Report on the European Union Advantages of UK membership to the European Union cover many fields from the businesses in the UK to British consumers and students. Membership benefits UK businesses because it makes trade between member states quicker and cheaper. This is because the EU is a customs union/ single market. This means that a business in the UK can export its goods and services to other EU member states and those goods and services will not have a tax tariff imposed on them. For example, America, a non-EU member, imposes a tariff on cars being imported from the UK. However, Germany, an EU member, does not impose a tariff on British cars being imported. Like wise the UK does not impose tariffs on German imports or on imports from any of the member states. This leads to more competition, more free trade and comparative advantages. The membership of the UK also benefits consumers because of the customs union / single market. British consumers will have cheaper prices, higher quality and more variety of goods from the increased EU competition. The consumer will also benefit from food and health and safety standards. For example, all goods that are produced in the European Union must now carry "best before" markings, price indicators and a list of ingredients, colourings and additives that they contain. ...read more.

The EU then offered funds / cash lumps to companies who would locate in South Wales. A German company, Bosch, took up the offer and located to the region and creating jobs. Ancillary firms then located near the Bosch factory to create the components needed to manufacture the products for Bosch. In the 1992 Process one of the main aims was to harmonise. Harmonisation means that the EU states agreed on the same set of rules to regulate trade across the whole of the EU. This benefits the EU members because it is easier to export and import things to other countries due to all the countries having the same laws. This also leads to a unified or single market. This means that once a product is in EU territory it is not checked again if it travels through another member state. This benefits the business because it allows for quicker transportation of goods and services. However, harmonisation can also be a bad thing. Since harmonisation in the EU occurred it lead to more drugs and illegal immigrants circulating throughout the member states. Although all countries must abide by the same laws, some countries are less strict than others. If an illegal immigrant gains access to a member state he has gained access to all member states. A good example of this can be seen between England and France. ...read more.

If workers want to work after these hours they are given overtime bonus added to their wage packet. The minimum pay is a base pay that each worker must receive per hour of work. Most companies offer its employees higher wages than the minimum wage to attract more employees. Specialised humans such as lawyers often get a lot more than the minimum wage. Labourers usually get paid higher than the minimum wage because the job they do is dirty, labour intensive and difficult. In the year 2000 the minimum wage was �3.50 but in October 2005 it became �5.05. In addition to the above two rights all workers must receive a minimum of four weeks holidays per year. This right was introduced to give workers the rest they deserved from their jobs. It affects labourers, especially, because a holiday is a big contrast to the labour intensive job they do. Finally a maternity / paternity leave is granted to parents of a newborn baby. The usual allowance for maternity / paternity leave is approx. weeks. The employee who takes the leave is usually paid and is guaranteed his / her job back when returning from the leave. If a firm breaks the any of the rules of the social chapter they could be taken to court and might have to pay fines and / or reimburse the effected employee. All in all these rights are welcomed hugely by labourers. ?? ?? ?? ?? Oliver Miocic 11 MW 1 ...read more.