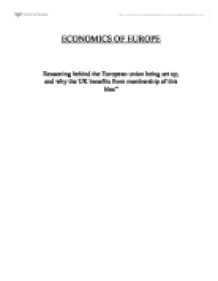 Reasoning behind the European union being set up, and why the UK benefits from membership of this bloc.

ECONOMICS OF EUROPE Reasoning behind the European union being set up, and why the UK benefits from membership of this bloc" In a variety of forms the European union (EU) has been in existence for over 40 years, originally formed as the European Economic Community (EEC) with the treaty of Rome in 1957 and came into operation on 1 January 1958. The six original member countries (Belgium, France, Italy, Luxemburg, Netherlands and West Germany.) had already made a move towards integration with the formation of the European Coal and Steel Community, 1952. This removed all restrictions on trade in coal, steel and iron ore between member states. The aim was to gain economies of scale and allow more effective competition with the USA and other foreign producers. This principle was to be extended and aimed eventually to be a full common market with completely free trade between members in all products, and completely free movement of labour, enterprise and capital. By 1968 all internal tariffs between the six member states had been abolished and the common external tariff established, although a number of restrictions on internal trade still remained (administrative, legal, etc) ...read more.

Those American firms employ almost one million British people. The European union now has a common external tariff and no internal tariff, a customs union. There were many common economic policies such as the Common Agriculture Policy (CAP), Regional Policy etc. one of the most fundamental changes in the EU was the Maastricht treaty, 1992. Although an extension to the treaty of Rome, it represents a major step for the union. It aims towards full political, economic and social union. Some of the major objectives are; * To create economic and social progress through an area without internal frontiers and through economic and monetary union (EMU) * To develop a common foreign, security and defence policy which might lead to common defence. * To introduce citizenship of the union. Since 1993 trade within the EU has operated very much like trade within a country. This means, in theory, a firm in Birmingham could sell its goods to Paris just as easy as to London. This will benefit British firms a lot due to increased exports. 53% of Britain's exports go to EU countries, as they can trade with all the EU countries with no border controls, tariffs etc. ...read more.

Such industries of agriculture benefited from the EU as well, as policies were set up such as Common Agricultural Policy (CAP). This involves the union setting high prices for farm products. This involves charging variable import duties to bring foreign food imports up to EU prices and intervention to buy up surpluses of food produced within the EU. Firms will also benefit from the increased mobility of labour. People will be able to travel in work within member states with much more ease, which will enable countries to hire in more experienced or specialized staff. There are many benefits to the UK individual of being a member of this bloc to. For example 'duty free' before 1993 if you were traveling in Europe you were limited to a certain amount of goods to take across the border without paying VAT. Now you can take as many goods as you like from one EU country to another, provided they are for your own consumption. However there are some specified amounts to stop fraud. * APPLIED ECONOMICS, Alan Griffiths & Stuart Wall * ESSENTIALS OF ECONOMICS, John Sloman * THE SCOTSMAN NEWPAPER * THE SUN NEWSPAPER * WWW.4STERLING.ORG * europa online ...read more.