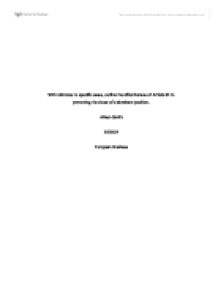 With reference to specific cases, outline the effectiveness of Article 82 in preventing the abuse of a dominant position.

With reference to specific cases, outline the effectiveness of Article 82 in preventing the abuse of a dominant position. Alison Smith BHBU4 European Business Competition policy is an important feature of the European Union as it is designed to promote economic welfare amongst all of the Member States by ensuring that markets are competitive. It does this through the implementation of Articles 81 and 82EC. However, only Article 82EC will be considered for the purpose of this essay. Article 82EC lays down that "any abuse by one or more undertakings of a dominant position within the common market or in so far as it may affect trade between Member States. Such abuse may, in particular, consist in: a) directly or indirectly imposing unfair purchase or selling prices or unfair trading conditions b) limiting production, markets or technical development to the prejudice of consumers c) applying dissimilar conditions to equivalent transactions with other trading parties, thereby placing them at a competitive advantage d) making the conclusion of contracts subject to acceptance by the other parties of supplementary obligations which, by their nature or according to commercial usage, have no connection with the subject of such contracts."1 Before an action can be brought against a company under Article 82, the company in question must be in a dominant position and in order to determine this, an economic analysis is required. ...read more.

The Commission saw this to be anti-competitive because it was making Hoffmann aware of the competition and allowing them to lower prices as and when it suited them to do so. Hoffmann was fined DM 1, 098, 000 and all contracts with customers had to be terminated. Along the same lines as price discrimination is predatory pricing which in effect is the dominant company lowering its prices by so much that it is impossible for other companies to compete and they then have to withdraw from the market. Leading case law in this area is illustrated in Akzo Chemie v Commission.8 Akzo was based in Holland and ECS was a small firm based in the UK. Both companies made organic peroxides (Benzoyl peroxide) which could be used in both the flour and plastics market. Originally ECS concentrated in making products within the flour market but then decided to diversify into the plastics market and in doing so solicited some of Akzo's customers. Akzo organised negotiations with ECS and when ECS refused to withdraw from the plastics market, Akzo took aggressive action by lowering its prices in order to drive ECS out of the market. Akzo was found to be in breach of Article 82 as it had purposefully approached ECS's customers with offers of prices significantly lower ...read more.

such cases, and as with all European law being translated into a particular foreign language, there is always the risk that the original meaning of Article 82 will not be understood or lose some of its essence. Looking at the number of cases in 2002, there were 321 antitrust cases (involving Articles 81, 82 and 86EC) compared to only 284 cases in 2001,10 which could either suggest that the Commission is being more effective at uncovering abuses of dominant positions which would explain the increase in cases or they could be being too lenient in previous cases and allowing companies to form the opinion that taking the risk of infringing Article 82EC would be worth it as the fines imposed have never rose above 3-4% of annual turnover, thus the potential increase in the profits the make through being in a dominant position would cover the fine and still have made them a profit. It is thought that making abuse of a dominant position a criminal offence would be a considerably better deterrent to Chief Executive Officers of large firms than simply fining them a percentage of annual turnover as a loss of freedom is far more disturbing to a person than a fine. And after all, the establishment of European law is all about ensuring freedom. ...read more.