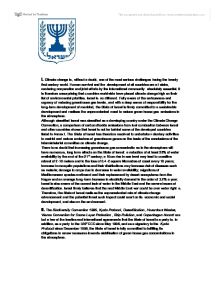 I. Climate change is, without a doubt, one of the most serious challenges facing the twenty first century world. Human survival and the development of all countries are at stake, rendering cooperation and joint efforts by the international community absolutely essential. It is therefore unsurprising that countries worldwide have placed climate change high on their list of environmental priorities. Israel is no different. Fully aware of the seriousness and urgency of reducing greenhouse gas levels, and with a deep sense of responsibility for the long-term development of mankind, the State of Israel is firmly committed to a sustainable development and realises the unprecedented need to reduce green house gas emissions in the atmosphere. Although classified Israel was classified as a developing country under the Climate Change Convention, a comparison of carbon dioxide emissions from fuel combustion between Israel and other countries shows that Israel is not far behind some of the developed countries listed in Annex I. The State of Israel has therefore resolved to undertake voluntary activities to restrict and reduce emissions of greenhouse gases on the basis of the conclusions of the interministerial committee on climate change. ...read more.

In addition, as a party to the UNFCCC since May 1996, and as a signatory to the Kyoto Protocol since December 1998, the State of Israel is fully committed to fulfilling its obligations to renew measures towards stabilisation of green house gas concentrations in the atmosphere. III.Israel assumes responsibility for a rise of 17% of CO2 levels in the atmosphere since 1996. Moreover, Israel is fully aware that, unlike other developed countries, whose greenhouse gas emissions are decreasing, Israel's emissions are expected to continue to increase. Reduction of greenhouse gas emissions is an especially difficult challenge in Israel, a country undergoing economic growth against a backdrop of continuous increases in both population and energy consumption. Yet Israel is determined to address the aforementioned difficulties and is set on reversing the trend by stabilising emissions. Current efforts are concentrating on assessing greenhouse gas emissions under different scenarios while identifying the steps necessary to reduce these emissions in an economically viable manner. Among the measures which have already been proposed are energy savings, both in buildings and in street lighting, by means of energy efficient light bulbs. ...read more.

Our goal for the forthcoming years, as firmly declared by the present Israeli President at the Copenhagen Summit, is to "reduce CO2 emissions by 20% by 2020 compared to a business-as-usual scenario". The State of Israel believes that this target will be successfully achieved through a 10% increase in renewable energy and a 20% reduction in electricity consumption by 2020. Israel is also fully aware that the Kyoto Protocol ends in December 2011 and that the Copenhagen Summit failed to bring about a satisfactory agreement on greenhouse gas emissions. Israel therefore strongly believes that a legally binding agreement must be made. Israel would like to inform all nations that the State of Israel is completely willing to sign such an agreement and face the challenges of meeting new, legally binding, green house gas emissions levels. The State of Israel looks forward to offering its support to the renewal of measures towards stabilisation of greenhouse gas concentrations. Israel is also prepared to debate all of subjects covered and is firmly assured that all nations will see Israel's strong commitment to reducing emission levels in the atmosphere. ?? ?? ?? ?? ...read more.