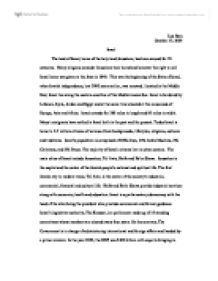 The land of Israel, home of the holy land Jerusalem, has been around for 35 centuries.

Lisa Bers October 27, 2003 Israel The land of Israel, home of the holy land Jerusalem, has been around for 35 centuries. Many religions consider Jerusalem their homeland however the right to call Israel home was given to the Jews in 1948. This was the beginning of the State of Israel, when Jewish independence, lost 2000 years earlier, was renewed. Located in the Middle East, Israel lies along the eastern coastline of the Mediterranean Sea. Israel is bordered by Lebanon, Syria, Jordan and Egypt and at the same time situated at the crossroads of Europe, Asia and Africa. Israel extends for 290 miles in length and 85 miles in width. Many immigrants have settled in Israel both in the past and the present. Today Israel is home to 6.5 million citizens of various ethnic backgrounds, lifestyles, religions, cultures and traditions. Israel's population is comprised of 82% Jews, 14% Arabs Muslims, 2% Christians, and 2% Druze. The majority of Israeli citizens live in urban centers. The main cities of Israel include Jerusalem, Tel Aviv, Haifa and Be'er Sheva. Jerusalem is the capital and the center of the Jewish people's national and spiritual life. The first Jewish city in modern times, Tel Aviv, is the center of the country's industrial, commercial, financial and cultural life. Haifa and Be'er Sheva provide industrial services along with economic, health and education. Israel is a parliamentary democracy with the head of the state being the president who provides ceremonial and formal guidance. Israel's legislative authority, The Knesset, is a parliament made up of 15 standing committees whose members are elected every four years. On the contrary, The Government is in charge of administering international and foreign affairs and headed by a prime minister. In the year 2002, the BDP was $106 billion with exports bringing in $38.7 billion and imports generating $43.5 billion. The industry in Israel is mostly concerned with manufacturing products based on technological innovation such as agro-technology, food processing and fine chemicals. ...read more.

They also pride themselves on establishing an Israeli society and want to integrate new immigrants who come to Israel seeking refuge. They had a dream for a national harmony among all citizens. However, it was obvious that this dream was becoming a dream of the past. At the beginning of the State of Israel media was responsible for acting as an advocate for national integration and to promote an Israeli-Jewish culture. Disappointingly this was not as easy as imagined. They soon came across problems such as new immigrants wanting to preserve their own unique cultures, secular Jews not having as much interest in Jewish culture, and a younger generation enticed by Western ideologies and the American dream. Among these problems was the most threatening of all, the Arabs who wanted to call Palestine their home and would retaliate against the Jews. Israeli media has had a tremendous role in national development. At first, while many immigrants were settling in Israel during the 50s and 60s, the media was primarily used as a way to teach Hebrew to immigrants. Teaching Hebrew to immigrants is a prime example of how Israel attempted to bring together all citizens. The media was also used to teach traditions and explain the significance of holidays via special broadcasts. During the first two decades of Israel national radio was in charge of promoting national integration. Radio did in fact succeed in creating a common ground among different ethnic and cultural groups through a variety of ways. For example radio was responsible for many things, including but not limited to, the teaching of the Hebrew language and religious traditions, supplying ethnic broadcasts for those who had not yet mastered the language, bringing citizens into ceremonial events, and reporting the war (Capri 333). Public television also promoted national integration but with one main difference. Television's form of cultural integration was limited to gathering Israelis to view mostly American programs and redefined the definition of Israeli-ness. ...read more.

Israel wanted social integration and it was by use of the foreign language press that they were able to re-socialize immigrants. As we have extensively studied in our Global Media Studies class, many cultures and societies have been saturated with media from other countries, specifically the U.S. When Israel was announced as an independent State the government attempted to use the media as a way to unite Jews coming from a variety of different countries. Although they all held their own ethnic and cultural backgrounds Israel saw them as the same; as Jews coming back to their homeland taken from them so long ago. The media propagated this idea of national integration to its citizens and they accepted. However over time both the media and the newer generations have changed. The media has become for commercialized and following capitalistic business practices to keep up with competing media from other countries. Western media has also penetrated Israeli media and providing hegemonic ideals to the younger generations. While the original Israeli citizens appreciate and respect the Israeli culture there are other groups who are more interested in what is going on in other parts of the world. The younger generation along with secular Jews are two prime examples of groups who downplay the importance of national identity. It would be helpful for the media to once again be used as a propaganda tool to promote assimilation. The history of the Jews has been an everlasting struggle to gain respect from other cultures along with independence. Israel has provided a home and it is important that all Israeli citizens understand how fortunate they are to have this land. They must remember this when the media tempts them with Western lifestyles or television shows. There are many geo-cultures in Israel today and all are affected by globalization in different ways. Hopefully Israel will soon be able to fulfill its original dreams and have all cultures come together as one with no one culture being thought of as subordinate to another. ...read more.