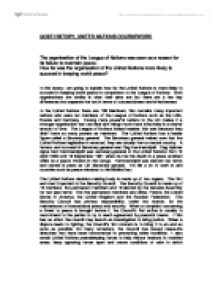 When a complaint concerning a threat to peace is brought before it, the Council's first action is usually to recommend to the parties to try to reach agreement by peaceful means. If this has no effect the council may launch an investigation to bring justice. When a dispute leads to fighting, the Council's first concern is to bring it to an end as soon as possible. On many occasions, the Council has issued cease-fire directives that have been instrumental in preventing wider hostilities. It also sends United Nations peacekeeping forces to help reduce tensions in troubled areas, keep opposing forces apart and create conditions of calm in which peaceful settlements may be sought. The Council may decide on enforcement measures, economic sanctions (such as trade embargoes) or collective military action. Evidence of the UN taking such actions was in the Middle East on Iraq when trouble arose with the bordering nation Kuwait. Each Council member has one vote. Decisions on procedural matters are made by an affirmative vote of at least nine of the 15 members. ...read more.

Although the United Nations looks to have been more successful than the League of Nations, it isn't perfect. The organisation was not able do anything with incidences in the Cold war such as the Cuban Missile Crises or overcome conflicts of interests involving world powers and weapons of mass destruction. The United Nations ability to impose legislation involving their army has aided them; this is evident from Desert Storm that was a success but didn't halt Sadam Hussein from causing more conflict later on which shows the UN's weakness. The United Nations has improved in terms of success as time goes on. After the Cold War many areas and situations have been improved such as in the Balkans where both the Bosnia and Kosovo crises have been resolved much due to UN presence. The United Nations has been more effective and more able to deal with situations of conflict than the League of Nations; this is due mainly because of its members. The League of Nations was unsuccessful because of its inability to deal with larger nations. The United Nations is those larger nations; this is why it is more successful. ...read more.