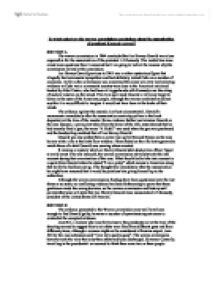 To what extent are the warren commissions conclusions about the assassination of president Kennedy correct?

To what extent are the warren commissions conclusions about the assassination of president Kennedy correct? SECTION A The warren commission in 1964 concluded that lee Harvey Oswald was alone responsible for the assassination of the president J.F.Kennedy. This verdict has since raised more questions than it answered but I am going to look at the reasons why the commission arrived at this conclusion. Lee Harvey Oswald previous to 1963 was a rather mysterious figure that allegedly had communist sympathies and had definitely visited Cuba on a number of occasions. As far as the commission was concerned this alone was very incriminating evidence as Cuba was a communist country very close to the American mainland headed by Fidel Castro, who had been at Loggerheads with Kennedy over the siting of nuclear missiles on the island. This I am sure made Oswald a very easy target to blame in the eyes of the American people, although the warren commission did not say this it is very difficult to imagine it would not have been in the backs of their minds. The evidence against the assassin is at best circumstantial. Oswald's movements immediately after the assassination certainly put him in the book depository at the time of the murder. ...read more.

Governor Connolly, travelling in the presidential car seemed to think there were two or three people involved or the shots were discharged from an automatic weapon, other evidence backs up this claim as tests after the assassination found that even a top marksmen could not fire three shots from Oswald's weapon in the given time with any accuracy. There are eyewitness reports that seem to have the shots coming from a number of different directions for instance, Lee Bowers, stationed in a position overlooking the Grassy Knoll claimed he saw two men behind a fence and a flash of light from that area during the shooting again, this type of evidence was disregarded by the Warren commission who maintained three shots coming from the sixth floor of the schoolbook depository. The warren commission stated that Lee Harvey Oswald acted alone, yet two witnesses, one of whom was Arnold Rowland; claimed they saw two men on the sixth floor of the schoolbook depository at the time of the assassination. The movements of Oswald directly after the shooting also seem to be in dispute. Deputy sheriff Roger Craig stated that he saw Oswald leave the schoolbook depository and join a heavy set man sitting in a station wagon, which then drove off towards the freeway. ...read more.

This bullet later became known as "the magic bullet" and it is quite easy to see why. Experiments after the assassination showed that not even FBI marksmen could carry out the number of shots in the speed and time that Oswald was supposed to have according to the warren commission. The trained marksmen took three seconds between their shots whereas Oswald was supposed to have done this in half the time that they could. This strikes me as being a bit far fetched to say the least, when you look at the background of Lee Harvey Oswald, which states 'marine's corps records reveal that Oswald's marksmanship ranged from "rather poor" to "fairly good" shot. Oswald's last recorded score only just qualified him for the marines lowest grade in marksmanship'. Also a former marine colleague or Oswald's, Nelson Delgado recalled 'I remember seeing him shooting. It was a pretty big joke because he missed a lot of "Maggie's drawers", you know, a lot of misses, but he didn't give a darn'. How is a man with this description supposed to carry out three shots that precise in that amount of time he did (1.5 seconds between shots) when three top rifle experts could not manage this on a stationary target that was situated 15 yards in front of them? ...read more.