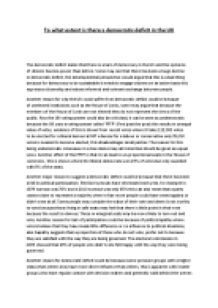 To what extent is there a democratic deficit in the UK?

﻿To what extent is there a democratic deficit in the UK The democratic deficit states that there is a lack of democracy in the UK and the opinions of citizens has less power than before. Some may see that there has been a huge decline in democratic deficit, the developmental perspective would argue that this is a bad thing because for democracy to be sustainable it needs to engage citizens on an active basis this expresses citizenship and values informed and tolerant exchange between people. Another reason for why the UK could suffer from democratic deficit could be because of unelected institutions such as the House of Lords, some may argue that because the members of the House of Lords are not elected they do not represent the views of the public. Also the UK voting system could also be criticised, it can be seen as undemocratic because the UK uses a voting system called ?FPTP? (First past the post) this results in unequal value of votes, evidence of this is shown from recent votes where it takes 115,000 votes to be elected for a ...read more.

Those in marginal seats may be more likely to turn out and vote. Another reason for lack of participation could be because of political apathy where voters believe that they have made little difference or no influence to political situations, also hapathy suggests that a proportion of those who do not vote, prefer not to because they are satisfied with the way they are being governed. The electoral commission in 2005 showed that 29% of people who didn?t vote felt happy with the way they were being governed. Another reason for democratic deficit could be because some pressure groups with a higher status than others may have more direct influence than others, this is apparent with insider groups who have regular contact with decision makers and generally walk behind the scenes rather than engaging in publicity stunts for media attention to increase publicity. Inside groups include sectional groups who have a narrow sectional interest such as the BMA who are funded by the government. Whereas, outside groups have the disadvantage because they do not have regular contact with decision makers and may result in law breaking ...read more.

This decision for devolution was done through a referendum, the referendum allowed people to answer a political question with a simple ?yes? or ?no? answer, this also would be seen as enhancing democracy as it allows the public to voice an opinion in a political matter, and it allowed the government to see what the public was in favour for. The transfer of west minister power to elected sub-national governments has allowed new legislations from these bodies, an example being Scottish and Welsh students having their university and tuition fees paid for. Some could see that subsidiarity would help enhance democracy as it allows the lowest tier of governments to engage in political decisions, this acts for local accountability making it more suitable for dealing with certain issues at a local level. In conclusion it is clear that the UK could suffer from certain impacts of democratic deficit such as unelected institutions, unfair voting systems and a decline in election turnout, however active participation such as pressure group membership and devolution are signals that the UK is becoming more democratic. ...read more.

4 Stars - A strong essay. There is a clearly demonstrated understanding of the fundamental characteristics and arguments that define the concept of a democratic deficit. The essay is well structured into a balanced argument and largely makes good use of supporting evidence - though in places it is vague and generalised.