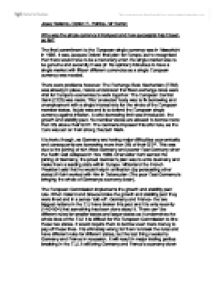 Why was the single currency introduced and how successful has it been so far? The final commitment to the European single currency was in Maastricht in 1992. It was Jacques Delors' final plan for Europe, as he recognised that there would have to be a monetary union if a single market was to be genuine and secondly it was (in his opinion) ridiculous to have a single market with fifteen different currencies so a single European currency was needed. There were problems however. The Exchange Rate Mechanism (ERM) was already in place, Delors understood that fixed exchange rates were vital for Europe's economies to work together. The European Central Bank (ECB) was made. This 'unelected' body was to fix borrowing and unemployment with a single interest rate for the whole of the European member states. Its job was and is to defend the European single currency against inflation. A strict borrowing limit was introduced- the growth and stability pact. No member states are allowed to borrow more than 3% above their GDP. ...read more.

It is difficult for the European Commission to fine these two states. It would require them to borrow even more money to pay off these fines. It is ultimately wrong for them to break the rules and have different rules for different states, but the last thing needed is Germany and France in recession. It will result in major trading parties breaking in the E.U, it will bring Germany and France's economy down and they will bring the rest of the E.U states with them, because they are the foundations for the other economies in Europe due to their shear size and large population. Maybe the rule is to strict and should be changed, but this would cause speculators to see the Euro as weak, and sell it, this would result in a collapse of the euro and a collapse in all European states economies. The single European currency in itself is a success in it actually coming about. Devaluisation isn't present between member states, as everyone knows the value of the Euro. ...read more.

Sovereignty has been pooled in Europe. The main reason that Britain don't join the euro (apart from Thatcher detesting Delors and the removal of sovereignty from Westminster) was the Growth and Stability pact. Many of the general public in the UK remember Black Wednesday in 1992 where we followed the strict ERM rules. John Major didn't devalue the pound and interest rates rose. Everything became very expensive and unemployment levels also rose. Many fear this may be what will happen if we join the single European currency as it stands. Furthermore the Growth and Stability pact may be too strict an idea. At present Chancellor Gordon Brown doesn't agree with it and he has the view that it is acceptable to borrow too much when you are in recession as long as you pay the money back in an economic upturn (certain amount of time). This method if adopted in Europe would give more flexibility to the Euro and the distance in which the UK may join the single European currency may be shortened. Josey Bellamy- Option E- Politics- Mr Dorran ...read more.