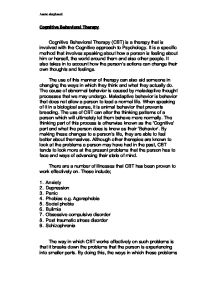 Cognitive Behavioral Therapy (CBT) is a therapy that is involved with the Cognitive approach to Psychology.

Cognitive Behavioral Therapy Cognitive Behavioral Therapy (CBT) is a therapy that is involved with the Cognitive approach to Psychology. It is a specific method that involves speaking about how a person is feeling about him or herself, the world around them and also other people. It also takes in to account how the person's actions can change their own thoughts and feelings. The use of this manner of therapy can also aid someone in changing the ways in which they think and what they actually do. The cause of abnormal behavior is caused by maladaptive thought processes that we may undergo. Maladaptive behavior is behavior that does not allow a person to lead a normal life. ...read more.

Although other therapies are known to look at the problems a person may have had in the past, CBT tends to look more at the present problems that the person has to face and ways of advancing their state of mind. There are a number of illnesses that CBT has been proven to work effectively on. These include; 1. Anxiety 2. Depression 3. Panic 4. Phobias e.g. Agoraphobia 5. Social phobia 6. Bulimia 7. Obsessive compulsive disorder 8. Post traumatic stress disorder 9. Schizophrenia The way in which CBT works effectively on such problems is that it breaks down the problems that the person is experiencing into smaller parts. ...read more.

Beck argued that when dealing with cases of depression, that the negative and unrealistic feelings should be uncovered and challenged. Beck's also stated that he believe the cognitive triad to be very important. This is made up of the negative thoughts a depressed person has about themselves, the world and the future. In such cases, the patient may see themselves as being helpless, worthless and inadequate. When looking at the effectiveness of CBT, a number of factors need to be taken into account. Cognitive and Cognitive Behavioral Therapy combines the two methods and seeks to listen to the patients take on the world. In the end, they can both help to alter behavior both directly and indirectly. ?? ?? ?? ?? Aaron shepheard ...read more.