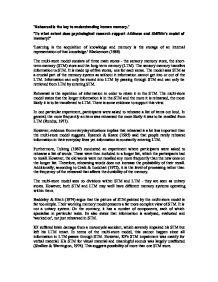 'To what extent does psychological research support Atkinson and Shiffrin's model of memory?'

'Rehearsal is the key to understanding human memory.' 'To what extent does psychological research support Atkinson and Shiffrin's model of memory?' 'Learning is the acquisition of knowledge and memory is the storage of an internal representation of that knowledge.' Blackemore (1988) The multi-store model consists of three main stores - the sensory memory store, the short-term memory (STM) store and the long-term memory (LTM). The sensory memory transfers information to STM. It is made up of five stores, one for each sense. The model sees STM as a crucial part of the memory system as without it information cannot get into or out of the LTM. Information can only be stored into LTM by passing through STM and can only be retrieved from LTM by entering STM. Rehearsal is the repetition of information in order to retain it in the STM. The multi-store model states that the longer information is in the STM and the more it is rehearsed, the more likely it is to be transferred to LTM. ...read more.

The multi-store model sees no divisions within STM and LTM - they are seen as unitary stores. However, both STM and LTM may well have different memory systems operating within them. Baddeley & Hitch (1974) argue that the picture of STM painted by the multi-store model is far too simple. Their working memory model presents a far more complex view of STM. It is not a unitary system. On the contrary, it has a number of components, each of which specialise in particular tasks. Its also states that information is analysed, evaluated and 'worked on', not just rehearsed in STM. KF suffered brain damage from a motorcycle accident, which severely impaired his STM but left his LTM intact. In terms of the multi-store model, this cannot happen since all information in LTM passes through STM. However, KF's STM impairment was mainly for verbal material. His STM for visual material and meaningful sounds was largely unaffected (Shallice & Warrington, 1974). ...read more.

There is a vast amount of evidence present to suggest that it is not the best model to use. It is branded as presenting an oversimplified view of memory and researchers seem to reject most concepts of the model as new models are developed. However, since its development in 1968, Atkinson and Shiffrin's multi-store model has been very influential. The model itself is based on evidence from a wide range of studies. Early research conducted by George Sperling (1960) provides evidence for the presence of subsystems within sensory memory. In addition, there is considerable evidence for the existence of sensory memory, STM and LTM and as separate memory stores. Furthermore, the model led to large amounts of research in order to investigate the different aspects presented by the model and most researchers still accept the broad and basic ideas underlined by the multi-store model. In conclusion, although it may be branded as too simple and sometimes even rejected, it still presents some of the basic facts that everyone agrees with. Therefore, it should be taken into consideration. ...read more.

Response to Question: Overall this is a very good response Ã¢â‚¬â€œ it has three main sections: an introduction, the arguments for and against the multi-store model, and the conclusion. A clear structure is good as it encourages a good, scientific ...

Response to Question: Overall this is a very good response Ã¢â‚¬â€œ it has three main sections: an introduction, the arguments for and against the multi-store model, and the conclusion. A clear structure is good as it encourages a good, scientific writing style (which is what examinaers like to see). The introduction is good as it eases the reader into the topic area rather than throwing them straight into the middle of an argument (so, all this needs to do is give some general background information on the topic area Ã¢â‚¬â€œ in this case: descriptions of the sensory, short term, and long term stores). The only criticism here is the quotes at the start Ã¢â‚¬â€œ although these are relevant IÃ¢â‚¬â„¢d suggest either leaving them out or integrating them into the main text (because it is not very conventional to put quotes alone at the start of an essay).

Level of Analysis: The student gives a good variety of evidence both for (RundusÃ¢â‚¬â„¢s experiment, and influence on other theories) and against (evidence from Eysenck and Keane, and Tulving, too simple, conflicting theory from Craik and Lockhart, the study of KF, too mechanistic etc) the model. This creates a balanced argument which is good as it shows the reader that the student is not biased. To improve the analysis, I would suggest that the conclusion needs to follow the evidence given; the student stated that the model should be taken into consideration despite the majority of evidence described disputing it. Giving a conclusion that follows the evidence is important as it shows that the student understands the meaning of the evidence, and has not simply rote-learnt it.

Quality of Writing: There are no problems in terms of spelling or grammar. The student is also successful in using technical terms that are expected at A Level. To add, when shortening terms to Ã¢â‚¬ËœSTMÃ¢â‚¬â„¢ and Ã¢â‚¬ËœLTMÃ¢â‚¬â„¢ they make it clear what they are referring to.