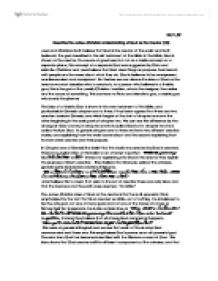 Describe the Judeo-Christian understanding of God as the Creator

24/11/07 Describe the Judeo-Christian understanding of God as the Creator (33) Jews and Christians both believe that God is the creator of the world and both believe in the god described in the old testament of the bible. In the bible, God is shown as the creator, the source of goodness, but not as a sterile concept on a separate plane, this concept of a separate God was suggested by Plato and Aristotle. Christians and Jews believe that God does things on purpose, he interacts with people and he cares about what they do. God is believed to be omnipresent, omnibenevolent and omnipotent. But before we can discuss the idea of God as the creator we must describe what a creator is, to a person who believes in a theistic god, this is the god of the Jewish/Christian tradition, who is the designer, the maker and the cause of something. This contrasts to Plato and Aristotle's god, a deistic god who is only the planner. The idea of a theistic God is shown in the new testament of the bible, and particularly in Genesis chapter one to three. It has been agreed that there are two creation stories in Genesis, one which begins at the start of chapter one and the other beginning in the early parts of chapter two. ...read more.

In genesis it says, "And it was good." Which shows that God the creator it both powerful but good, he did not intend to create things bad. However this idea raises problems, if God created everything did he create evil? Were these planned by God, and put into the world because of God's word? However Genesis does attempt to explain this idea with the story of Adam and Eve. Adam and Eve ignore God's warning and destroy the perfection that he has given them, by disobeying him through their own free will and falling to the temptation presented to them by the snake. "God said that because he knows that when you eat it you will be like god and know what is good and what is bad." However this still leads to question did God deliberately, purposefully create the snake and give it its trickery. Did god intend that the world should be perfect containing only goodness or was the existence of the possibility of evil part of the plan? In both stories in genesis, humanity is the pinnacle of creation. In the first story of genesis God creates Humans last but gives them dominion over the earth. "And now we will make human beings; they will be like us and resemble us. ...read more.

In the Judaeo-Christian concept, God is not all unmoved but takes interest and pride in the things that he has made. "And it was good." The unmoved mover is independent and once it creates it he leaves the creation alone. For Aristotle, the unmoved mover creates motion by attracting everything towards itself; it is the objects in motion that are attracted while the unmoved mover remains immutable. However in the Judaeo-Christian tradition God cares for his creation, he does not simply care for himself but his creation and takes an interest in it while giving it purpose. In conclusion, God's creation is described as deliberate; he gave it purpose and meaning. He is all-powerful, omnipotent, which is shown by the fact he created out of nothing, ex nihilo, matter comes into existence where there was no matter before. Jews and Christians believe that God is the creator of everything, however this idea raises problems because if this is true he created evil, and if he did this, he is not all-loving otherwise he would not wish to inflict evil upon us. Finally it is believed that God's creation is continual, he did not just create the world and leave but he is interested in it and cares for his creation. He gave it purpose and one of those purposes was to create a relationship between himself and his creation. ...read more.