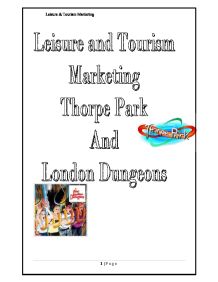 Contents Page Index * Introduction. * Background of the Thorpe Park and London Dungeons. * Information on rides and ticket prices to Thorpe Park and London Dungeons. * Opening times. * Their facilities that they provide. * Information about what is in Thorpe Park and what is in London Dungeons and what it's about. * Information about their catering facilities. Introduction In this coursework that I am presenting, will be based on Thorpe Park I will be producing understandable and descriptive accounts of information on their products, services and pricing that Thorpe Park offers to their consumers. Background of Thorpe Park Thorpe Park is a theme park located in Surrey, United Kingdom. It was built in 1979 on the site of a gravel pit which was partially flooded with the intention of creating a water based theme for the park. The park's first large roller coaster, Colossus, was added in 2002. In 2007, Tussauds was bought out by Merlin Entertainments. In 2007, the park had 1.7 million visitors, making it the second most visited theme park in the United Kingdom after Alton Towers, and 13th most visited in Europe. Thorpe Park is situated on what was a quarry in Staines, up until the late 1970s. Former owners Ready Mix Concrete filled the site with water after the quarry's closure, with the intent to start a leisure park. On May 24, 1979, Thorpe Park was officially opened by Louis Mountbatten who lent his name to the Mountbatten Pavilion, a large domed structure located at the entrance to the park. At this early stage in the park's history, the complex consisted of educational exhibitions such as Model World, a collection of famous structures from around the world built in 1:36 scale, with the Mountbatten Pavilion housing a standing aircraft display. In 1998, the park was bought by The Tussauds Group, who at the time also owned Chessington World of Adventures, the sister attraction of Thorpe Park As a result of the close proximity of the two parks, Tussauds decided to cater for two different markets, with Chessington being transformed into a family park. ...read more.

Overall making the organisation more value for money for the customers. * Expand: An opportunity for London Dungeons would be if they were to expand their attraction, it would help to increase amount of products and make the organisation bigger. Opportunities to have a wider target market and increase amount of visitors. * More facilities: Another opportunity for London Dungeons could be if they provide more facilities for their customers e.g. to provide their customers with a car park so that the visitors can be reassured that they would not have to leave the attraction because they were worried about car parking tickets. * Theme: If London Dungeons where to introduce some other theme to their attraction, apart from anything gruesome. Then this would be an opportunity for them to influence new visitors to there attraction, and have a new type of market they could aim there products. Comparing and contrasting both organisations After describing in details the SWOT analysis for both of my organisations I will now compare and contrast the both of them in the table below: SWOT analysis Thorpe Park London Dungeons Strengths Innovation, right products, varied products and room for expansion. Good customer service, satisfy customers expectations, right products and overseas visitors and good location Weaknesses Seasonal training and not experienced staff It's a small attraction, the theme is old and always about the same gruesome stuff and they have old products Threats Other popular attraction with rivals, customer service and customer satisfaction Similar attractions, competition and location Opportunities. Improve staff training, update and develop old products Theme of the attraction, update products, more facilities and expand. This table that I have made, shows that London Dungeons has more strengths then Thorpe Park within their attraction. London Dungeons seem to have good customer service than Thorpe Park. For their staff are more fully trained up, but there is a lot of competition for London Dungeons seeing it's in the city. Whereas Thorpe Park is located where there isn't another theme park nearby. Leisure & Tourism Marketing 54 | Page ...read more.