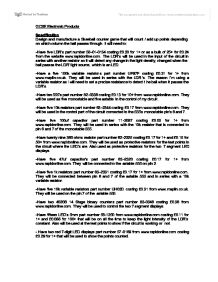 GCSE Electronic Products Specification Design and manufacture a Skeeball counter game that will count / add up points depending on which column the ball passes through.

GCSE Electronic Products Specification Design and manufacture a Skeeball counter game that will count / add up points depending on which column the ball passes through. It will need to: -Have five LDR's part number 58-01-0134 costing �0.30 for 1+ or as a bulk of 25+ for �0.24 from the website www.rapidonline.com. The LDR's will be used in the input of the circuit in series with another resistor so it will detect any change in the light density, changed when the ball passes the LDR' light source, which is an LED -Have a five 100k variable resistors part number UF97F costing �0.31 for 1+ from www.maplin.co.uk. They will be used in series with the LDR's. The reason I'm using a variable resistor as I will need to set a precise resistance to detect the ball when it passes the LDR's. -Have ten 555's part number 82-0336 costing �0.13 for 10+ from www.rapidonline.com. They will be used as five monostable and five astable in the control of my circuit. -Have five 10k resistors part number 63-2344 costing �0.17 from www.rapidonline.com. ...read more.