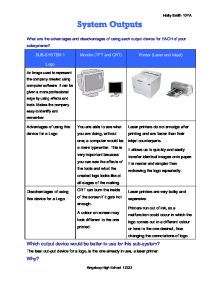 System Outputs What are the advantages and disadvantages of using each output device for EACH of your subsystems? SUB-SYSTEM 1 Logo Monitor (TFT and CRT) Printer (Laser and Inkjet) An image used to represent the company created using computer software. It can be given a more professional edge by using effects and tools. Makes the company easy to identify and remember. Advantages of using this device for a Logo You are able to see what you are doing, without one; a computer would be a mere typewriter. This is very important because you can see the effects of the tools and what the created logo looks like at all stages of the making. Laser printers do not smudge after printing and are faster than their inkjet counterparts. It allows us to quickly and easily transfer identical images onto paper. It is neater and simpler than redrawing the logo repeatedly. Disadvantages of using this device for a Logo CRT can burn the inside of the screen if it gets hot enough. A colour on screen may look different to the one printed. ...read more.

The database information has no need to be printed and stored as paper records when it is stored on the computers CPU. Which output device would be better to use for this sub-system? The VDU was more important in the database than the printer. Why? Because there was no need for the database to be printed. SUB-SYSTEM 3 Identity Card Monitor (TFT and CRT) Printer (Laser and Inkjet) Advantages of using this device for ID card Again, as another graphical image, being able to see the ID card in design was of utmost importance. Also, the display enabled me to see and use tools like mail merge which speeded up the process of putting staff details onto the ID card design. The advantages of using a printer are to quickly replicate the image of the ID card identically with 8 cards to a page. It is neater, faster and more professional to print them than to draw them by hand. Disadvantages of using this device for ID Card Continual staring at a VDU can cause eyestrain and headaches. ...read more.

Disadvantages of using this device for the user manual Continual staring at a VDU can cause eyestrain and headaches. Any malfunctions could waste paper and ink can smudge. Which output device would be better to use for this sub-system? The monitor and printer are both needed. Why? Because the monitor allows me to see what I am typing, and typing is faster than writing by hand, and printing takes less time than copying out a neat copy. Are there any other output devices that can be used for each of four subsystems? If I had the chance to remake anything, I think it would be effective to create a user manual on a disc with visual and vocal instructions so that it will become easier for people to understand, because different people find different methods of teaching most useful, so a disc will provide visual, vocal and text instructions thus apply to the majority of people. Also, a CD manual does not waste paper. Thus, it would require the output of a speaker. All of these subsystems could be backed up on discs in case the original file is lost, although discs are both input and output. ?? ?? ?? ?? Holly Smith 10YA Kingsbury High School 12332 ...read more.