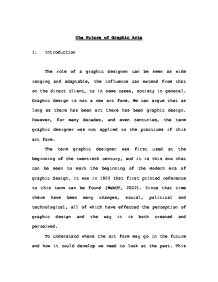 The Future of Graphic Arts I. Introduction The role of a graphic designer can be seen as wide ranging and adaptable

The Future of Graphic Arts I. Introduction The role of a graphic designer can be seen as wide ranging and adaptable, the influence can extend from that on the direct client, to in some cases, society in general. Graphic design is not a new art form. We can argue that as long as there has been art there has been graphic design. However, for many decades, and even centuries, the term graphic designer was not applied to the practices if this art form. The term graphic designer was first used at the beginning of the twentieth century, and it is this era that can be seen to mark the beginning of the modern era of graphic design. It was in 1922 that first printed reference to this term can be found (WebCT, 2002). Since that time there have been many changes, social, political and technological, all of which have effected the perception of graphic design and the way it is both created and perceived. To understand where the art form may go in the future and how it could develop we need to look at the past. This is form this we will get a 'feel' of the sector and see how patterns emerge that reflect and art reflected by the different broader environmental aspects of modern life. II. The Early Twentieth Century This is not the beginning of graphic art, indeed there is a plethora of advertisements form the Victorian era that ay be seen as accomplished graphic art, with a history stretching back much further. However, in any paper we have to use some form of starting point, and the art that take prior to the beginning of the twentieth century is the art of another ear where there were nit the same modern influences, such as ,multiculturalism, communication and the same facilities as well as the increased technology that made it more possible for the same piece of art to be seen by many more people, such as through bill board advertising and the use of the printed medium. ...read more.

Small businesses are able to produce their own business stationary and develop their own advertisements and literature, even a local parish or community magazine that used to be hand types can look like a professionally produced publication. However, when these are used there are still some very basic rules that are followed the advantage with the computer and the ability to see the layout before a publication is printed on a large scale can be to see that in the main even those without training or specific knowledge will follow them naturally. The ability to keep the readers attention is a combination of factors. The first will be the content of the text, and if we are looking at this from a purely typographical or graphical art perspective then this is not in the control of the typesetter (Anonymous, 2000). The design of the text and the size of the text are important as illegible text or test that is uncomfortable to read will loose the interest of the reader just as easily as boring content (Anonymous, 2000). The next items that need to be considered are not so obvious unless you look at a piece of typesetting where they are wrong, and then it becomes obvious. There are the line lengths and the spacing between the words and letters. It is these spacing between letters that can make a publications look professional. Until the computer was in many homes and small businesses the typing would be on a conventional type writer where the space between each letter is the same with no sense of proportion as seen in the 'courier' and the 'courier new' type faces (Anonymous, 2000). This fixed spacing has become associated with the home produced leaflets that were duplicated with duplicating machine or by the use of photocopiers has become less apparent as proportional fonts have been used, examples may be seen as the popular times new roman that is a well used font. ...read more.

Due to the rapid growth of the market and the continual increase in numbers of business on the Internet the projection are all over the place, the growth is going to be far greater than the industry has the capability to cope with if some estimates are accepted (Rohan, 2000). If other perspectives are adopted then the increased demand may well be taken up by non graphic designers by way of design programmes and those who have learnt by experience and from their own computers at home. The commissioning of web cites is likely to continue, and the recent structure appear to be not only commissioning the web site, but looking for a provider who can give a whole package, not only the web site design, but also the web hosting and maintenance. The pricing structure for this is usually a large one off fee for the design and then an on going smaller fee on a monthly or annual basis for the hosting and maintenance of the web site (CSG, 2000). Costs appear to range from �1,000 for web design and �30 per month for maintenance with hosting an additional fee, with no upper limits (CSG, 2000). The costs may become more uniform as the industry becomes more competitive and the purchases have more choice from the increasing number of companies setting up to undertake web design. VII. Conclusion The student may like to draw their own conclusion., However it appears that thee had been a century of change. The uses of graphic arts remain the same but the increase in technology and communication mean that they are more proliferate than ever before. The development of the internet as well as many forms of artistic development have place an entirely new perspective on graphic arts and the role of the graphic artist, The future may be seen as both a great opportunity, with all the new facilities and chances to publish but also as a threat with the new computer publishing package and the increased public understanding,. ...read more.