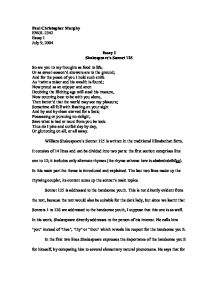 Paul Christopher Murphy ENGL 2342 Essay I July 9, 2004 Essay I Shakespeare's Sonnet 125 So are you to my thoughts as food to life, Or as sweet-season'd showers are to the ground; And for the peace of you I hold such strife As 'twixt a miser and his wealth is found; Now proud as an enjoyer and anon Doubting the filching age will steal his treasure, Now counting best to be with you alone, Then better'd that the world may see my pleasure; Sometime all full with feasting on your sight And by and by clean starved for a look; Possessing or pursuing no delight, Save what is had or must from you be took. Thus do I pine and surfeit day by day, Or gluttoning on all, or all away. William Shakespeare's Sonnet 125 is written in the traditional Elizabethan form. It consists of 14 lines and can be divided into two parts: the first section comprises line one to 12; it includes only alternate rhymes (the rhyme scheme here is ababcdcdefefgg). ...read more.

Food is essential for animals, as well as showers are for the plants or the ground. By equating him with this he claims that without the handsome youth Shakespeare isn't able to think, to do what distinguishes human beings from other animals. In the subsequent 3 lines the inner conflict that Shakespeare has is shown: Even if Shakespeare is with his handsome youth, he cannot be contented, because he always fears he might lose his most valuable treasure. He compares himself to a miser, who is on the one hand happy with his possessions, but on the other hand he can't enjoy his situation because he's much too afraid that he could lose everything. In lines 7 and 8 my interpretation of an inner conflict is supported when Shakespeare writes that he's torn between urge to be alone with his handsome youth and the wish to "show him off" in society. ...read more.

In lines 1,2,4 and 5 he uses similes to compare his handsome youth to natural phenomena. These create images in the reader's mind and are thus helpful for the understanding. Furthermore, several antithesis contribute to the idea of an inner conflict in Shakespeare, for example in line 11 "Possessing or pursuing" or in line 13 " pine and surfeit". Also the anaphor in lines 5 and 7 ("Now...) are in contradiction to the word "then" at the beginning of line 8. Intrinsically, Shakespeare is once again not sure about his own life and feelings. His emotional life is in a mess and he is not able to organize it. This situation is obviously not unusual for Shakespeare, because in this Sonnet 125 he calls the handsome youth the most important person in his life, while "two sonnets later" the Dark Lady is already the person of his interest and the addressee of his work... however, I believe that he succeeds in letting the reader be participate in his thoughts. ...read more.