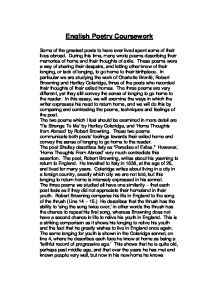 English Poetry Coursework Some of the greatest poets to have ever lived spent some of their lives abroad. During this time, many wrote poems describing their memories of home and their thoughts of exile. These poems were a way of sharing their despairs, and letting other know of their longing, or lack of longing, to go home to their birthplace. In particular we are studying the work of Charlotte Bront�, Robert Browning and Hartley Coleridge, three of the poets who recorded their thoughts of their exiled homes. The three poems are very different, yet they still convey the sense of longing to go home to the reader. In this essay, we will examine the ways in which the writer expresses his need to return home, and we will do this by comparing and contrasting the poems, techniques and feelings of the poet. The two poems which I feel should be examined in more detail are 'Tis Strange To Me' by Hartley Coleridge, and 'Home Thoughts from Abroad' by Robert Browning. These two poems communicate both poets' feelings towards their exiled home and convey the sense of longing to go home to the reader. The poet Shelley describes Italy as "Paradise of Exiles." However, 'Home Thoughts From Abroad' very much contradicts this assertion. The poet, Robert Browning, writes about his yearning to return to England. He travelled to Italy in 1838, at the age of 26, and lived for many years. ...read more.

Also, it makes the poem more interesting to read, as the voice falls naturally while reading this line. Robert Browning also uses syntax in his poem, when he says "Scatters on the clover Blossoms and Dewdrops." This also adds to the enjoyment of reading this poem as readers are drawn by the poetic nature of the language. The way that the words are laid out in this poem is striking and adds to the atmosphere and the reading of it. This is quite an effective technique to use. Another key technique that is used by the poets is the form of each poem, i.e. the way the poem is laid out. 'Home Thoughts from Abroad' is divided into 2 stanzas. This allows the poet to address different issues in each stanza, giving the reader a broader view as to the poets thoughts on exile. For example, in the first stanza he shows his envy towards the people who wake up in England and do not appreciate to natural beauty of the landscape. In the second stanza he reminisces about the wildlife and plant life in England, and compares it to the wildlife and plant life of Italy. In his opinion, the humble buttercup is "far brighter than the gaudy melon flower." This shows just how much he misses living in England, so much so that he even misses the buttercup flower. The buttercup, as we all know, is a petite yellow flower that grows in vast numbers throughout the British Isles. ...read more.

Enjambment is also used in Bront[PC1]�'s poem, although it is not used to 'as great an effect' as the other two poets use it. In these poems, each poet has conveyed the sense of longing to go home very well. On many occasions people feel homesick when abroad, but these poets have recorded their homesickness in a way so as to let others know how they feel. Robert Browning - a well known English poet - has written about his yearning to observe the natural aspect of his homeland. Charlotte Bront� writes about her longing to go home, even though she lives just a few miles away over a distant hill. Hartley Coleridge is the more isolated of the three poets, feeling as if he was excommunicated from his surroundings. In my opinion, the Coleridge sonnet has the most appeal of the three poems. His sense of alienation is extremely well represented in the short 14-line poem. He also uses very effective similes to express his feelings to the reader. I also believe that this poem is written more effectively than the other two, as he uses syntax and enjambment to great effect, whilst also using appropriate vocabulary to express his feelings. I feel that he misses home the most out of the three poets, purely because his poem has had some influence on me. 'The Teacher's Monologue' and 'Home Thoughts from Abroad' do not compare to the work of Hartley Coleridge on this particular occasion. [PC1] ...read more.