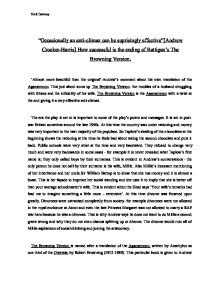 &amp;#147;Occasionally an anti-climax can be suprisingly effective&amp;#148;[Andrew Crocker-Harris] How successful is the ending of Rattigan&amp;#146;s The Browning Version.

"Occasionally an anti-climax can be suprisingly effective"[Andrew Crocker-Harris] How successful is the ending of Rattigan's The Browning Version. 'Almost more beautiful than the original'-Andrew's comment about his own translation of the Agamemnon. This just about sums up The Browning Version- the troubles of a husband struggling with illness and the infidelity of his wife. The Browning Version is the Agamemnon with a twist at the end giving it a very effective anti-climax. The era the play is set in is important to some of the play's points and messages. It is set in post-war Britain sometime around the late 1940s. At this time the country was under rationing and money was very important to the vast majority of the populace. So Taplow's stealing of the chocolates at the beginning shows the rationing at the time-he feels bad about taking the second chocolate and puts it back. Public schools were very strict at the time and very backward. They refused to change very much and were very backwards in some cases - for example it is never revealed what Taplow's first name is; they only called boys by their surnames. This is evident in Andrew's conversations - the only person he does not call by their surname is his wife, Millie. ...read more.

This means that the emotions displayed at the end are all the more surprising and cathartic. His history with Millie is outlined in sketchy little facts linked into the conversations. He has always had a stormy marriage and it has never been fulfilled for either party. Millie hints at all the affairs she has had and she has always told Andrew the sordid details. This has worn Andrew down and he is referred to as 'dead', 'an utter failure', a 'Henpecked husband' and he is thought to be by Taplow to be 'all shrivelled up inside like a nut'. Again this makes the ending much more emotional. Andrew believes his life is a subject for farce, but in fact he has misread his life and it is more like a tragedy. He also believes that his life is a common occurrence worldwide. Millie is a social climber and is completely evil. She dashes Andrew feelings about the book with a completely evil comment about it being appeasement so that Taplow can get his remove. She is so mean to him to the point of resentment because he can't provide her with what she needs and she is a free spirit. She has to find this kind of love through other channels for example affairs. Frank is typical of young teachers- lively, vigorous and liked by the boys in his care. ...read more.

Andrew claims that an anti-climax can be very effective and this is true of The Browning Version in these circumstances. The way the anti climax is executed and the preamble to it makes it a very successful way of ending the play. The ending is kept under wraps in a very simple and straightforward way with the ambiguity of a telephone call, which is very anonymous. At the very end, the meal is almost the picture of an ideal marriage but with a twist of bitterness in the expression on the face of Millie. As The Browning Version is based on a tragedy it could have ended like one, but it does the reverse and finishes in the way you would least expect if you had no knowledge of the play beforehand. If it had ended like a tragedy would likely be less successful in it's message and the ending would not mean so much to the audience in the same way. The ending of The Browning Version is a very strange one compared to the other plays I have read or seen, and I find the ending a pleasant surprise. With all things considered, I think the anti-climax is as effective as Andrew claims it to be. Rattigan's use of tragedy and anti-climax, and his characters, make the ending of The Browning Version a very good one undeniably. ?? ?? ?? ?? Nick Dawnay ...read more.