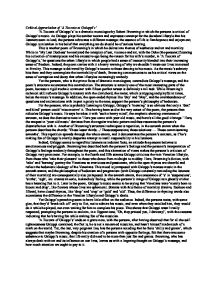 A Toccata of Galuppi's' is a dramatic monologue by Robert Browning in which the persona is critical of Galuppi's music. As Galuppi plays his somber toccata and expresses contempt for the decadent lifestyle that his listeners seem to lead

Critical Appreciation of 'A Toccata at Galuppi's' 'A Toccata of Galuppi's' is a dramatic monologue by Robert Browning in which the persona is critical of Galuppi's music. As Galuppi plays his somber toccata and expresses contempt for the decadent lifestyle that his listeners seem to lead, the persona advocates a different message: the essence of life is flamboyance and enjoyment; Galuppi is mistaken in his belief that everything we do should be of serious bearing. This is another poem of Browning's in which he delves into themes of aesthetics and art and morality. While in 'My Last Duchess' he analyzed the interplay of s*x, violence and art, with the Duke (the persona) flaunting his collection of masterpieces and his excessive ego being the reason for his wife's murder, in 'A Toccata of Galuppi's,' he questions the urban lifestyle in which people had a sense of insecurity blended into their increasing sense of freedom. Indeed, the poem carries with it a heavy warning of why we shouldn't waste our lives immersed in frivolity. ...read more.

He says he takes it with 'such a heavy mind', the emphatic showing overtones of sarcasm, as does the dismissive tone in 'Here you come with your old music, and here's all the good it brings.' Here, the anapest in 'your old music' deviates from the regular trochaic pattern and thus resonates the persona's dissatisfaction with it. Another of Browning's structural techniques is repetition, in the seventh stanza when the persona describes the chords: 'Those lesser thirds.../ Those suspensions, those solutions - .. Those commiserating sevenths'. This repetition spreads through the whole stanza, and it demonstrates the persona's sarcasm, as if he's making fun of Galuppi's overtly desperate attempt to instill responsibility in his listeners. Indeed, Galuppi seems to regard his listeners as indolent fools, an attitude the persona believes is sanctimonious and priggish. Browning has described both the persona's feelings and the persona's interpretation of Galuppi's feelings randomly throughout the poem, and this alternation of views makes the persona's criticism of Galuppi very prominent. ...read more.

and even when they extolled him, they would do it while he played, not even waiting for him to complete his piece. This shows that Galuppi wasn't really respected, prompting the persona to exclaim, in a flippant tone, 'Oh, they praised you, I dare say!', with the caesuras indicating that he's having fun while making fun of the musician. 'A Toccata of Galuppi's' ends on a grave note, with the persona, after having observed that for all the self-righteousness Galuppi contained, the fact is, he is not a renowned musician, and hasn't himself made much of a mark on the world. Yet, the last, very poignant line, has the persona acceding that he feels 'chilly and grown', which suggests that maybe Browning, despite his creation of a persona with opposite feelings, felt that there was some substance to Galuppi's music, that life really did need to be more than just fun and games. Browning, who has always dealt with art and its influence on our lives, leaves us with a lingering thought on Galuppi's message, and how much attention we ought to pay to it. ...read more.