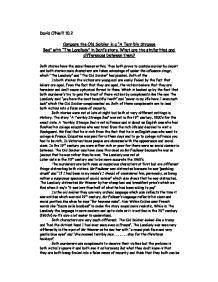 David O'Neill 10.2 Compare the Old Soldier in a "A Terribly Strange Bed" with "The Landlady" in Dahl's story. What are the similarities and differences between them? Both stories have the same themes within. They both prove to contain murder by deceit and both stories main characters are taken advantage of under the influence drugs, which "The Landlady" and "The Old Soldier" had planted. Both of the In both stories the victims are young and are easily fooled by the fact that killers are aged. From the fact that they are aged, the victims believe that they are harmless and don't cause a physical threat to them. Which is backed up by the fact that both murderer's try to gain the trust of there victims by compliments like the one The Landlady said "you have the most beautiful teeth" and "never in my life have I seen such luck" which the Old Soldier complimented on. Both of these compliments are to lead both victims into a false sense of security. Both stories were set at late at night but both at very different settings in History. The story "A Terribly Strange Bed" was set in the 19th century, 1850's for the exact date. A Terribly Strange Bed is set in France and is about an English man who had finished his college education who was tired from the rich life and decided to visit a Blackguard. ...read more.

. stay for the Christmas holidays". Both murderers use compliments to deceive their victims but the problem is both victim's ignore it and both see it as harmless. But what they don't know is that they are both being fooled into a false sense of security and think that they both can be trusted. The Old Soldier fooled Mr Faulkner by encouraging him with the words "go on and win! Break the bank Mille tonnerres! My gallant English comrade, break the bank". Also he tells "permit me to restore to the proper place two Napoleons which you have dropped" which is saying he had dropped two coins on the floor and the Old Soldier had picked them up. But I don't think Mr Faulkner did actually drop any coins and the Old Soldier said he did to gain the trust of him. The Landlady paid compliments to Mr Weaver to show that she meant no harm like "You have the most beautiful teeth, Mr Weaver did you know that?" and "I open the door and see someone standing there who is just exactly right' . . . . . . .. 'Like you". By every compliment she pays to Mr Weaver the more she gains his trust and is some what fooled because he comments "but she was quiet obviously a kind and generous soul". ...read more.

Also obvious he was in trouble, as every person who had stayed in the bed and breakfast has never left. The author of "A Terribly Strange Bed" and "The Landlady" had different views of the unsuspecting characters. Wilkie Collins thought the Old Soldier as "a vagabond" and he mentions that the Old Soldier desevered everything he had coming to him. While Roald Dahl had a lot more sympathy to the Landlady as she is seen upon as a slightly "dotty" old lady and is mentally disturbed. "She had probably lost a son in the war . . . . .. Never got over it" so from that Roald Dahl shows sympathy through Mr Weaver and doesn't know what she is doing when she kills these men. Looking back I think I may have been fooled by maybe some of the clue's but as soon as he offered to pay for the first bottle of champagne I would have left, as I would feel as if he would be trying to get me drunk and take advantage. In the Landlady, I would feel that it was strange that there were no other guests in the Bed and Breakfast and also how nobody had ever stayed there for 2 years. I would of finally left as soon as she said that Mr Mulholland and Mr Temple still on the third floor together after remembering they had both gone missing. ...read more.