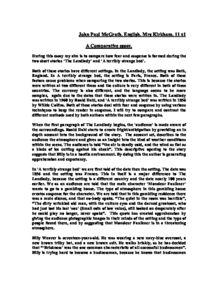 John Paul McGrath, English, Mrs Kirkham, 11 x1 A Comparative essay. During this essay my aim is to compare how fear and suspense is formed during the two short stories 'The Landlady' and 'A terribly strange bed'. Both of these stories have different settings. In the Landlady, the setting was Bath, England. In A terribly strange bed, the setting is Paris, France. Both of these factors cause problems when comparing the two stories. This is because the stories were written at two different times and the culture is very different in both of these countries. The currency is also different, and the language seems to be more complex, again due to the dates that these stories were written in. The Landlady was written in 1960 by Roald Dahl, and 'A terribly strange bed' was written in 1856 by Wilkie Collins. Both of these stories deal with fear and suspense by using various techniques to keep the reader in suspense. I will try to compare and contrast the different methods used by both authors within the next few paragraphs. When the first paragraph of The Landlady begins, the 'audience' is made aware of the surroundings. Roald Dahl starts to create fright/anticipation by providing an in depth account into the background of the story. The account set, describes to the audience the atmosphere and gives us an insight into the kind of weather conditions within the scene. The audience is told "the air is deadly cold, and the wind as flat as a blade of ice cutting against his cheek". ...read more.

This is another clue that suggests that he can afford to travel around Europe. We meet the old soldier as Monsieur Faulkner starts to win a substantial amount of money on the gambling table called " Rouge et Noir"(Red and Black). The Old Soldier was described in detail; Monsieur Faulkner describes him as a suspicious specimen. He then goes on to describe the soldiers appearance: "goggling-bloodshot eyes, mangy mustachios, and a broken nose. He had the dirtiest pair of hands I had every saw, even in France." The soldier seems to have a plan for Monsieur Faulkner as he involves himself in his winnings. There are a few similarities in throughout the two stories, one of these being the two different plots during the stories. In the Landlady the conspiracy was to lure Billy into the house and to poison him with a preserving chemical, as we believe that she wants to preserve his body when he has died. In 'A terribly strange bed' the plot wasn't developed until Monsieur Faulkner had won a substantial amount of money at the gambling table, but when this had happened the plan was to try and keep him at the gambling residence and to somehow steal his money, or nearer to the point murder him for his money. Another similarity during these two stories is that both characters are described to be in hostile environments. For Billy the hostile environment was a 'Deadly cold' small town called Bath in England, and for Monsieur Faulkner it was a gambling residence in Paris, France. ...read more.

The Italics also put an emphasis on the words used in the dialogue, which enhanced . In 'A terribly strange bed' the apprehension is created through the silence in the gambling residence. I have also identified the similarities between the stories and mentioned their significance to the stories. There are two differences between the stories which I have become aware of. I have noticed that the audience is much more involved in The Landlady, and that we can guess what is going to happen next. However in A terribly strange bed, Monsieur Faulkner looks like he will be 'done for', but he escapes his death luckily. The audience is involved in the fright and anticipation at all times, this is directly linked with the way that he recounts this tale. We are told what happens to Monsieur Faulkner, but with the Landlady being an open-ended story we are left to guess what will happen to Billy, whether he will live or die. I have also realised that there is a major difference between the two stories. When reading through the stories I realised that The Landlady concentrates on more on suspense rather than fear. This is because the author is writing a story, and suspense is the key factor in this story. A terribly strange bed concentrates on fear because this is being told from a persons point of view, and he is explaining his emotions in the story. This is how he is portraying his fear throughout the story. He is stating how frightened and afraid he was for his safety while he was at the gambling house. ?? ?? ?? ?? ...read more.