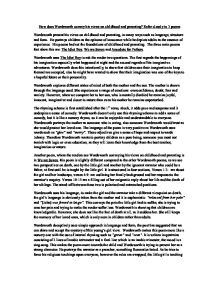 Compare the poems for childhood and parenting

How does Wordsworth convey his views on childhood and parenting? Refer closely to 3 poems Wordsworth present his views on childhood and parenting, in many ways such as language, structure and form. He portrays children as the epitome of innocence while he depicts adults as the essence of experience. His poems had set the foundations of childhood and parenting. The three main poems that show this are: The Idiot Boy, We are Seven and Anecdote for Fathers. Wordsworth uses The Idiot Boy to ask the reader two questions. The first regards the happenings of his imagination especially what happened at night and the second regards of his imaginative adventures. Wordsworth does this intentionally, to show that children use their imagination to keep themselves occupied, also he might have wanted to show that their imagination was one of the keys to a hopeful future or their personality. Wordsworth explores different states of mind of both the mother and the son. ...read more.

Verses 10-15 are a filling out of her enigmatic reply about her life and the death of her siblings. The stand-off between these two is polarised and entrenched positions. Wordsworth uses his language, to make the girl and the narrator take a different viewpoint on death, the girl's language is obviously taken from the mother and it is euphemistic: "released from her pain" and "[John] was forced to let go". This conveys the pain the little girl had to suffer; she is trying to ease her pain and trying to make the reader suffer less. Wordsworth is showing that children are knowledgeable. However, she does not like the fact of death at all, as it saddens her. She still keeps the memory of her loved ones, which is only seen in children rather than adults. Wordsworth deceptively uses simple approach in language and form, the poet has suggested that we can share and accept the mystery of this young's girl view. ...read more.

The poem contrasts the cynicism and selfishness of the father with the physical and mental purity of the child. Time is meaningless anyway to a child's short existence and the poem illustrates how children are corrupted by society and adults. Wordsworth is implying that we should not force logic and rationality on our children, as we must respect their feelings: we are not all the same and that is the key to the mystery and beauty of life. In the last verse it can be seen that the father is the 'child of the man'. The child can be seen as a symbol of nature, which is common in the three poems of Wordsworth. Overall it can be said, that Wordsworth sees a cynical point of view towards parents, but not towards the mother. It can be also said that the narrator and the father are both male, he could be seen as quite anti-male. He sees children as someone we must delicately take care, as they are our future's generation and happiness. ...read more.