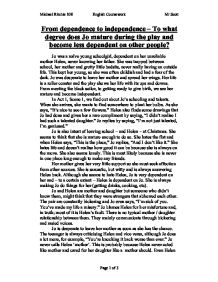 From dependence to independence - To what degree does Jo mature during the play and become less dependent on other people?

From dependence to independence - To what degree does Jo mature during the play and become less dependent on other people? Jo was a na�ve young schoolgirl, dependent on her unreliable mother Helen, never knowing her father. She was trapped between school, her mother and grotty little bedsits, never really having an outside life. This kept her young, so she was often childish and had a fear of the dark. Jo was desperate to leave her mother and spread her wings. Her life is a roller coaster and the play shows her life with its ups and downs. From meeting the black sailor, to getting ready to give birth, we see her mature and become independent. In Act 1, Scene 1, we find out about Jo's schooling and talents. When she arrives, she wants to find somewhere to plant her bulbs. As she says, "It's nice to see a few flowers." Helen also finds some drawings that Jo had done and gives her a rare compliment by saying, "I didn't realise I had such a talented daughter." Jo replies by saying, "I'm not just talented, I'm geniused." ...read more.

and he responds, "Not yet." He also has photographs of all his ex-girlfriends. Jo teases him quite a bit, asking about his eye and why he's marrying Helen. Jo also has a fear of the dark, "I'm not frightened of the darkness outside. It's the darkness inside I don't like." This could be that she is only scared of her future and not what's happening to everyone else. Jo lives in a poor, sad life and her needs are not important to Helen and the terrible mother neglects Jo a lot, for example, leaving her alone for a weekend while she runs off with Peter. Helen also makes no attempt to help Jo when she's pregnant. Because of the lack of motherly love, Jo is determined to become independent. She plans to move out, get a job and marry a black sailor. Her mother disapproves but that makes Jo even more single-minded. She is only sixteen so we see that she is pretty independent for her age. She is growing less dependant on Helen, which is a good thing. Readers may think that she is doing this because she has realised that Helen will never love her as much as her many boyfriends. ...read more.

She is intent on keeping the baby at first because she thinks it is cruel to have them aborted. She does, though, have some doubts. For example, she doesn't want to breast feed her baby. Geoff brings her a doll to practice holds on. She says the colour's wrong - the father being black - and explodes. She screams, "I'll bash its brains out! I'll kill it! I don't want to be a mother," which makes us think that she may have an abortion after all. Previously though, the baby kicked her and she was overwhelmed. All of these details then leave us wondering if she is ready for motherhood. It is more likely that she is ready to become a mother because she has matured a lot since the beginning of the play when she was dependant on Helen. As the play progresses, we see Jo turn from a na�ve young girl to a mature woman. She is no longer dependant on anyone and, although she is probably destined to a life living in small flats and houses, the prospects are bright and, as she sings at the very end, a glimmer of hope shines through and we think she may have a happy life. By Michael J. Ritchie Michael Ritchie 10E English Coursework Mr Scott Page 1 of 3 ...read more.