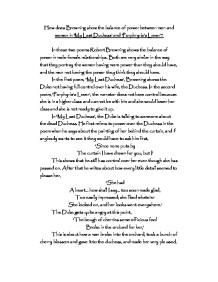 How does Browning show the balance of power between men and women in 'My Last Duchess' and 'Porphryria's Lover'?

How does Browning show the balance of power between men and women in 'My Last Duchess' and 'Porphryria's Lover'? In these two poems Robert Browning shows the balance of power in male-female relationships. Both are very similar in the way that they portray the women having more power than they should have, and the men not having the power they think they should have. In the first poem, 'My Last Duchess', Browning shows the Duke not having full control over his wife, the Duchess. In the second poem, 'Porphyria's Lover', the narrator does not have control because she is in a higher class and cannot be with him and she would lower her class and she is not ready to give it up. In 'My Last Duchess', the Duke is talking to someone about the dead Duchess. He first refers to power over the Duchess in the poem when he says about the painting of her behind the curtain, and if ...read more.

He gave her his old and important family name which most women would give their happiness to have, when she married him, which in the Duke's eyes is better than anything else in the world. He says that to comment on this behaviour is stooping down to a lower level, 'And I choose Never to stoop' The Duchess's behaviour becomes beyond tolerable next, 'Oh, sir, she smiled, no doubt, When'er I passed her; but who passed without Much the same smile? This grew; I gave commands; Then all smiles stopped together.' This greatly suggests that the Duke thought he had the power over the Duchess, and used it to order someone to kill her, although he doesn't directly say but he strongly hints it. But Browning cleverly wrote the poem to show that the Duchess was the one that really had the power, as she drove him mad with anger and jealousy, and used it to control him. ...read more.

Then Browning talks about how Porphyria puts her arms around him and how she whispers how she loves him and wants to be with him. 'Happy and proud; at last I knew, Porphyria worshipped me;' Then he thinks for a while and then decides what to do. After a while he decides to kill her. I think Browning wrote for the narrator to kill Porphyria because at that moment she loved him and wanted to be with him for the rest of her life. But this would mean giving up her class, her money and her family were most likely to disown her, so he killed her so she would not change her mind. At the end of the poem Browning writes how the narrator expects to be punished, 'And yet God has not said a word' I think these poems are cleverly written by Browning to show power and love, and how the men in the two poems think they have the power but really they do not. ...read more.