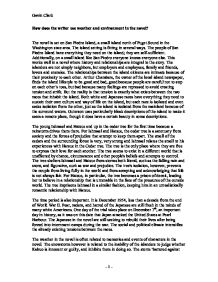 How does the writer use weather and environment in the novel?

How does the writer use weather and environment in the novel? The novel is set on San Piedro Island, a small island north of Puget Sound in the Washington state area. The island setting is fitting in several ways. The people of San Piedro Island have everything they need on the island; they are self-sufficient. Additionally, on a small island like San Piedro everyone knows everyone else. This works well in a novel where history and relationships are integral to the story. The islanders are not simply neighbors, but employers and employees, family and friends, lovers and enemies. The relationships between the island citizens are intimate because of their proximity to each other. Arthur Chambers, the owner of the local island newspaper, finds the island lifestyle to be good and bad, good because people are careful not to step on each other's toes, but bad because many feelings are repressed to avoid creating tension and strife. But the reality is that tension is exactly what exists between the two races that inhabit the island. ...read more.

The tree imprisons Ishmael in a similar fashion, keeping him in an unrealistically romantic relationship with Hatsue. The time period is also important. It is December 1954, less than a decade from the end of World War II. Fear, racism, and hatred of the Japanese are still fresh in the minds of many white Americans. One day of the trial takes place on December 7th, an important day in history, as it was on this date that Japan attacked the United States at Pearl Harbour. The Japanese in the novel are still seeking to rebuild their lives after being forced into internment camps during the war. The social and political climate intensifies the already existing tensions between the races. The weather in the novel is often related to memories and events of characters in the novel. The snowstorm however is related to the inability of the islanders to judge whether Kabuo is innocent or guilty, and inhibits them in doing so. ...read more.

Other incidents of adverse weather likewise affect the novel's course of events. The disorienting fog on the water on the night of the death of Carl is indirectly responsible for his death because it causes him to lose his way and end up in the risky waters of the shipping channel. Rough seas complicate Ishmael's platoon landing at Betio during the war, increasing the carnage and losses the platoon suffers. In every case, nature pushes human beings, controls them, or puts them at its mercy. Humans become complacent, as shown when Ishmael sees so many cars overturned after the storm, and seek to survive and cope as best as possible. In conclusion, Guterson uses the Environment the character is in to add to particular scenes, with the description relating to how the character feels about the experience. The overall feeling of independent isolation amongst the islanders is carried throughout the whole novel from the environment. The weather is used to add underlying messages to certain themes in the novel. The whole theme of the weather is based on being a symbol for the chance, uncontrollable incidents that affect human lives. (1,055 words) Gavin Clark - 1 - ...read more.